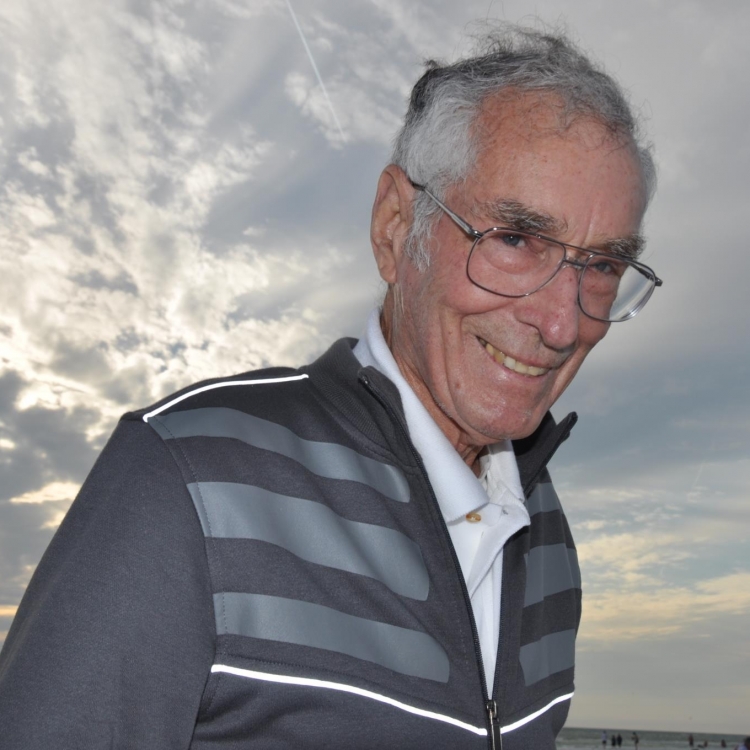 To the UCLA medical team who cared for my father in his final weeks of life:

My father, Frank Eck, recently passed away on the 8th floor of your medical center, in the ICU. After a bravely combating a myriad of health issues for two-and-a-half weeks with profound determination to get better and head home, he was transitioned into comfort care early in the morning of his last day, halfway through his 82nd trip around the Sun, where he was graciously given the chance to be surrounded by his immediate family members. His final breath was exhaled at 10:42 am on May 25.

My father was a longtime fan of the UCLA medical center.
In June of 2002, when I was 17, I was diagnosed with Acute Lymphoblastic Leukemia in the older medical facility across the street, by the unforgettably humorous Dr. Stephen Feig and limitlessly empathetic LaVette Bowles, NP. Aside from them, Dr. Jacqueline Casillas, and many other doctors and nurses in the pediatric hematology/oncology clinic my father and mother, Elvira Eck, both played vital roles in ensuring my care and comfort throughout my treatment there, and they always credited the extraordinarily professional, qualified, and consistent medical professionals at UCLA for saving my life. I like to thank and credit them both, as well as UCLA, for still being here.

As one small example of the multitude of tasks my parents had to add on to their professional lives in order to help UCLA save my life, my father routinely navigated the various Los Angeles massive parking lots, aka freeways, in order to leave work, pick me up from home, drop me off at UCLA for outpatient clinic, go back to work, pick me up when I was done, drop me off at home, go back to work, then come back home to continue being one of two incredible parents for my siblings and me, all coordinated and pulled off in a time where none of us owned cell phones. If there was a way to calculate the amount of extra time my father spent on the road while I was sick, it would still only make up a minuscule fraction of time he spent on earth going the extra mile not because he had to, but because it was his very nature to be good, do good, ask nothing in return, and leave a smile and a thank you in his wake.

There were numerous events throughout my cancer experience that gradually elevated my father’s already high regard for the UCLA medical center, and when I completed that journey, he placed the staff and hospital in his list of people and places to which he would never stop expressing boundless gratitude.

That high level of regard never plateaued, right up until his final breath.

While I was still undergoing maintenance chemotherapy, I was struck by a car whose driver had not been paying attention to the traffic signal’s red hue on my way home from a job interview at Loyola Marymount University’s Recreational Center, a few weeks before starting my first year of college there. (By the way, If it wasn’t for another amazing UCLA staff member who my father and I couldn’t thank enough, Patty Kerrigan, PhD the School & Cognitive Intervention specialist, I wouldn’t have finished high school on time. Even if I did, I would have just transitioned straight to community college with little ambition in my heart, had she not only encouraged, but guided me through the process.)

My right leg was immediately broken; I flew into the car’s windshield; the driver slammed on the brakes; I flew across the intersection; I landed on my front side, fracturing my wrist; I rolled to the side; I checked my head for damage; I called for someone to call 911.

As I could see several people surrounding me were on the phone with 911, I asked one person if I could use their phone to call my mom.

“Hey mom, I’m not going to go to Chicago tonight after all…”

“Why not? You changed your mind?”

After hearing mom scream out over the phone, I reassured her that I was fine and waited for the paramedics to arrive. They completely removed my clothes right there in the middle of rush hour Sepulveda Boulevard, where a crowd of people had gathered to check on the commotion. As I scanned the sky and crowd around me, I saw my father standing there from a short distance, looking over me.

“Dad? What are you doing here?”

“Mother called and told me. Are you ok?”
He directed the paramedics to take me to the one place he trusted most: UCLA. (I got that job at LMU, by the way.)

Several years after cancer was gone from my body, it was still on my mind. My father had seen me recover physically, but emotionally I had not fully recovered. While I always acted like I had fully recovered from the experience, there were many emotional side effects that led me down some pretty dark cognitive alleys, of which my parents knew little about until UCLA came back into our lives. Hilary Gan, MA CCLS, the compassionate child life specialist who helped guide me through treatment and the person I leaned upon for most spinal tap procedures I had to endure, asked me during one of my annual checkups if I wanted to participate in the UCLA Daltrey/Townshend Teen and Young Adult Cancer Advisory Board to help design and develop an age appropriate cancer care facility for the UCLA Santa Monica facility. That was the start of a therapeutic journey that continues to this day. I have since connected with some of the world’s finest people – caretakers, doctors, hospital executives, and, most importantly, other people who went through what I went through around the age I had to endure it. This changed my life in so many ways, such as meeting the people behind the imperative mission at Teen Cancer America to give the teen and young adult age group the tools they need to prevent falling behind in life when they are diagnosed with cancer at such an important developmental stage.

My dad knew all of this and his regard for UCLA continued its perpetually exponential rise.

When he suffered from his first set of strokes more than a decade ago, he credited UCLA for saving his life.

When he had a TAVR heart procedure last year, he credited Dr. William Suh for saving his life.

When he was admitted to Ronald Reagan UCLA Medical Center a few weeks ago, on the day before Mother’s Day, he knew he was going to receive the same quality care I had always received, and that he had consistently received during all of his previous visits to the facility.

As you can probably imagine, my dad passed the tendency to be long-winded on to me. He spared no words when it came to thanking each and every person who came into his room to help treat him. He was profoundly appreciative of the level of respect and professionalism consistently demonstrated by everyone who played a role in his experience there, from the doctors on his team, to the specialists, to the nurses, to the therapists, to the transport teams, and everyone else. Their respectful tones, eye contact, vigilance, and knowledge massively impressed my father and was crucial in allowing him to maintain his dignity, even in this, his most weak and dependent stage of his life. My sister, Katerina Van Biene, and I had the flexibility in our schedules and privilege to be by his side most of his final days, where we routinely observed this sort of professional consistency every single hour of every single day.

My father wrote long-winded thank you letters to staff members each time he was discharged from the hospital setting. He was ever-determined to show his appreciation of everyone who was part of the experience he so loathed to be involved in, because they always helped reassure him that even though being in the hospital was never any fun, he knew he would be receiving the most well-rounded treatment anyone could have asked for.

UCLA offered my father hope and comfort in his greatest times of despair. More importantly, they offered him compassion and companionship.

I wish I could recollect each and personally thank every medical team member who came through my father’s doors during his last few weeks of life. To be honest, rather than thank you all, I wish I could all give you a warm, gracious embrace. However, after dealing with the impending loss of my father and all that he had to go through physically before he left us, I cannot even begin to put together the list of people who not only reinforced his regard for UCLA, but helped elevate it to new levels. Every single person he came into contact with, from the transport team staff to the RNs, residents, custodians, chaplains, volunteers, and doctors, helped my dad feel respected, comfortable, and attended to. Even if it was apparent that the specialists were on a tight schedule and head to get moving along to the next patient, they would always give my dad that extra one to five minutes for him to tell him a little story about himself, why he admired them, and offer them his boundless gratitude.

Since I cannot remember all of the people who played a vital role in my father’s care and maintenance of dignity, I would ask that this message is passed along through colleagues and by word of mouth to the staff at UCLA, with the hopes that it comes across to every single one of them. Although he would have taken the time to investigate each and every name and personally handwrite a thank you letter to each and every one of you, I will allow social media to do its thing and get this to each of you with every intent he would have had in his mind to offer you thanks.
Thank you for everything you have done for us, Ronald Reagan UCLA Medical Center, throughout the years we have had to build a relationship with you.

Thank you for providing my father with the best possible care, comfort, and treatment throughout his final years on this planet.

Thank you for accommodating his and his family’s wishes to allow him to be transferred to the ICU those last few days, where he was able to hang on long and comfortably enough to have his longtime wish fulfilled – having all 7 of his children gathered together in the same place at the same time. Coming from San Diego, Houston, Reno, Minnesota, Chatsworth, and the island of Saipan, that was the first time we all got to be together, and he was fully aware of it when the last of us came through the door. We were able to share several hours together telling stories, telling jokes, singing songs, and honoring him, as one last family reunion for us all to enjoy and celebrate the endearing, gentle, adventurous, and humble life that he led, until his body ran out of energy and he drifted off to sleep. We were able to hear him laugh several more times before we said goodbye, which was invaluable to us. He was awarded a storybook finale for his life well-lived.
We were able to see tears of joy flow down Frank Charles Eck’s face when he was in the greatest moment of distress in his lifetime.

This was made possible by the medical team at UCLA.

Thank you UCLA, for everything.

If anyone is interested in learning a bit more about Frank’s legacy, he conveniently produced this film about “a few of his favorite things” – his children!