When Luis Diaz
was diagnosed with leukemia at age 16, he never imagined that his daughter
would face a similar battle more than a decade later.

Luis’
daughter, Jazmine, then age 2, was diagnosed with Ewing Sarcoma, a rare type of
cancer that occurs in bones or in the soft tissue around the bones. Luis and
his wife, Jeanette, turned to the same care team at UCLA Health that had treated
Luis 16 years earlier. In an unusual twist, the Los Angeles Dodgers played a
role in both of their healing journeys.

When Luis was diagnosed with cancer in 2002, he believed his odds of survival were grim, and he resisted going through treatment. His mother, Maria Guadalupe Alvarado, convinced him to seek care at UCLA Ronald Reagan Medical Center after giving up on his first round of chemotherapy at another Los Angeles hospital. Not only did he receive life-saving support from UCLA’s care team, an added boost was when former Dodgers’ pitcher Eric Gagne visited his beside one day and connected with him through their mutual love of baseball. In a roller-coaster-ride of treatment, Luis, who initially thought he had only two months to live, had defied the odds for 17 years as a husband and father to four young children.

Just at
Luis’ resilience surprised his doctors, Jazmine’s journey has been one of
uncertainty and remarkable progress. Soon after she underwent surgery to remove
malignant tumors in her right pelvis, she lost her eyesight and ability to
speak. Jazmine remained in a vegetative state for almost four months before
waking up one afternoon in November 2018 to ask for a glass of water.

“I spent
every day with her, waiting for any sign that showed that she was still there,”
said Jeanette Diaz. “That afternoon when she said “agua”, I knew she would slowly come back to be the Jazmine we had
before the sickness.”

Since then, she has been on the fast track to recovery: talking, eating, being able to see, and going to physical therapy to re-learn how to walk. Luis and Jazmine now share not only a remarkable story of strength and resilience, but she has developed the same love for the Dodgers as her father by watching Dodger games on television.

The Dodgers invited Jazmine, Luis, Jeanette, Maria Guadalupe, and two of Jazmine’s siblings to participate in the opening ceremony at a recent Dodger game—the first the family had attended together. Taking the mound, Luis and Jazmine threw the first pitch together – a symbolic representation of their shared struggle against cancer and a celebration of Jazmine having no evidence of cancer.

This is their day at Dodger Stadium 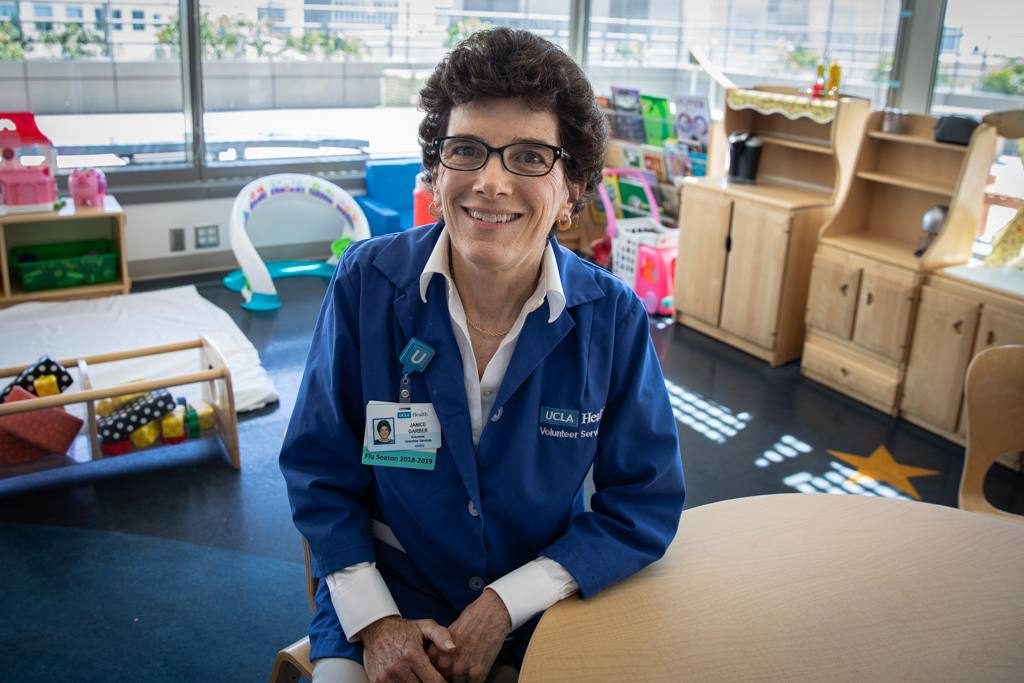 “Volunteering here was life-changing for me,” says Jan Garber, who volunteered at UCLA Health 40 years ago. “I volunteered when I was 17 with a brand new program, Child Activity. It was a new concept in hospitalization for children. I now volunteer in the Child Life Program. I don’t remember as many long-term patients from back then. I think now, because of all the wonderful medical advances, the doctors can do a lot more. I remember that when I was first here, they performed the first pediatric bone marrow transplant. It was very exciting to be here and be around that kind of life-changing procedure. Now, we have a lot of kids who are here for bone marrow transplants.”

“When I come in to volunteer, I’m assigned to different rooms, and I see if they need or want anything. If a parent wants a break, I will stay with the child. I come in one day a week, whereas the last time I worked, I was doing a work-study program through my high school. I came every day after school at 12:30 pm and stayed until 6:00 pm. I was a shy kid, but I really blossomed. I would have to go into rooms and introduce myself to parents and to kids, and it took some time to get comfortable with that, but it was a great experience. I realized ‘I can do this.’ You develop relationships. I still remember some of the kids from then. When I was 17, I would hang out with other 17-year-olds. It was cool because I was hanging out with a peer.”

“I retired a few years ago and wanted to do some volunteer work, and at first returning here didn’t occur to me. My mother got sick and I was taking care of her for a while. During that time she was brought into the UCLA Medical Center, Santa Monica geriatrics unit, which was fabulous. She got such great care. I wanted to give back. Everyone here is so lovely, and I’m going to keep volunteering until I can’t anymore. When I first came back, it took me a while to feel comfortable volunteering again. Everything is so different. Now it’s so fun and the time passes so quickly.” 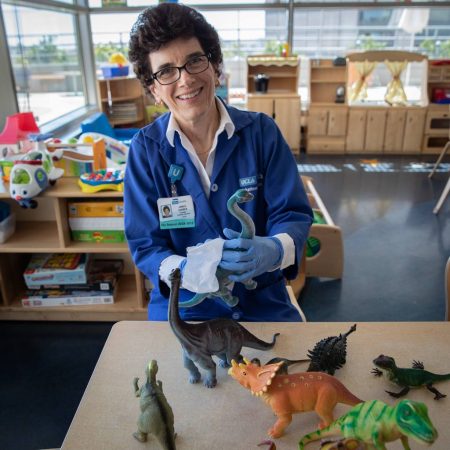 “Back then, there weren’t as many protocols we had to follow. There was no hand sanitizer outside the rooms. In the playroom, we would just straighten the room at the end of the day. Now, we clean all the toys and chairs and tables. We clean anything the kids might have touched or come into contact with. We would take the kids downstairs in beds or wheelchairs to a patio area since they didn’t have an outdoor area like they do now. There was no parent or teen lounge. They have iPads and other electronics for the kids now, which play a bigger part in keeping the kids entertained. There are also more groups that come in and do things for the kids to entertain them.”

“I was a special education teacher so I bring something different to volunteering. Some people have said to me, ‘How can you volunteer? It must be so depressing,’ but I see so many incredible, extraordinary things. I’m in awe of everyone here. The kids are so brave and strong. As a parent, my heart hurts for the parents here, but they’re so strong, kind, and appreciative. All the Child Life Specialists are awesome and make sure the kids’ lives are as normal as possible. I think there are so many problems in the world, that if I can do one little thing, it’s a good thing. It may sound trite, but I think I get a lot more than I give.”