Not Held Back by Seizures

“At first I didn’t think anything of it. I thought I was just getting the chills and blanking out for a second. It wasn’t until my mom noticed that we put two and two together,” says 18-year-old Briza Garcia, who was diagnosed with juvenile myoclonic epilepsy at 17. “It was hard to find a pediatric […]

The Adolescent Epilepsy Center at UCLA will open its doors in June at 300 UCLA Medical Plaza. The unique, multidisciplinary center will offer a holistic treatment approach for teenagers with epilepsy and their parents. “We frequently diagnose epilepsy during the teen years, and the condition can have a significant, often negative, impact on a child’s […]

My husband and I have four kids and our third child is missing a piece of a chromosome, has a brain abnormality called agenesis of the corpus callosum, epilepsy and developmental delays. He has a rare form of a rare syndrome of which there have only been 200 documented cases of. It affects everyone differently […]

Epilepsy – a disorder of the brain associated with sudden and unpredictable seizures – is the most common chronic neurological condition among children in the U.S., affecting more than 470,000 children and adolescents under the age of 18. Understanding seizures “A seizure is a sudden surge of electrical activity in the brain that usually affects […] 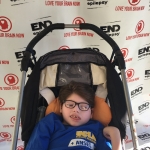 I can’t believe it has been ten years, but what I wrote to friends and family about our very first visit with our son’s neurologist, Dr. Jason Lerner, back in 2007 is still true: “He left us with the impression that excellent medical care and a friendly, compassionate bedside manner don’t have to be strangers.” […]

“Your son has epilepsy.” Four words. Four terrifying words. Heartbreaking. Devastating. It is difficult to find words that best convey what a parent feels when they receive such a diagnosis in regards to their child. A frenzy of questions and concerns enter the mind at lightning speed along with a sense of dread that […]

We would like to recognize our Neurologist, Dr. Shawn Hussain. We first met Dr. Hussain back in 2010 when our then 5-year-old daughter, Natalie was first diagnosed with epilepsy. Dr. Hussain was one of the main Neurologists working to find the right medications to bring Natalie’s seizures under control. Natalie has been hospitalized several times […]

A new hope: Innovative options for patients with intractable epilepsy

Patients with intractable epilepsy have seizures that are difficult to control with medication. These uncontrolled seizures are a serious health condition that be potentially life-threatening. But there is hope for patients with intractable epilepsy. The UCLA Epilepsy Program is a unique program that offers multiple approaches for treating patients, from traditional surgery to innovative nonsurgical […]

“Jonah has been dealing with epilepsy for three years now,” says Susan Sanders, mother of 8-year-old Jonah Sanders. “He wasn’t getting seizure control with any of the meds he was on; he was still having an average of one-to-three seizures per week.” Jonah underwent a seven-hour surgery where doctors removed a small part of the […]

This is the remarkable story of our little boy Evan, and his life with catastrophic epilepsy, and the surgical procedure hemispherectomy that saved his life. When Evan turned three months old, he was diagnosed with infantile spasms, a rare and catastrophic seizure disorder that can do so much damage very quickly, often causing him hundreds […]