‘It is a recognition of the scholarly environment and infrastructure we have built to enable and foster outstanding scientific research,’ says David Geffen School of Medicine Dean Kelsey Martin.

With the motto “turning discovery into health,” the National Institutes of Health’s (NIH) mission is to understand and improve human health by supporting rigorous and innovative medical research through more than $40 billion a year in grants.

To that end, the NIH in 2020 awarded more than $590 million in grants to the David Geffen School of Medicine at UCLA, putting it second in the nation among all academic medical centers in NIH support.

UCLA’s medical school “benefits enormously from sharing a campus with a top-ranked health system and the No. 1-ranked public university in the nation,” Martin adds, “providing extraordinary opportunities for interdisciplinary and interprofessional research.”

UCLA Health President Johnese Spisso, RN, MPA, notes that outstanding faculty researchers contribute to the health system’s overall success. “UCLA Health is on the leading edge of innovation in health care,” she says. “Being selected as a recipient of NIH funding shows the breadth of research and breakthroughs happening here.”

Here’s a look at some of the UCLA departments receiving NIH funding in 2020 and the research those grants are supporting:

The No. 1 overall funding recipient among departments of medicine nationwide, UCLA is the home of the operations center for the AIDS Clinical Trials Group, an international network that conducts clinical trials worldwide, says Judith S. Currier, MD, chief of the Division of Infectious Diseases and ACTG Principal Investigator. “We have over 60 sites now in 16 countries,” she says, “and the funding to support the clinical trials at our sites comes through UCLA.”

In 2020, the National Institute of Allergy and Infectious Diseases and the NIH tapped the AIDS Clinical Trials Group (ACTG) to work with the COVID-19 Prevention Network and the Accelerating COVID-19 Therapeutics and Vaccine Partnership to conduct clinical trials for COVID-19 outpatient treatments, which led to increased funding for the investigative team.

“This is what we call team science,” Dr. Currier says. “It involves a multidisciplinary group of people working across sites around the globe, collectively, to advance the treatment of both HIV and COVID. UCLA is the institution where the ACTG operations center is based.”

While some of the trials the funding supports are conducted at UCLA and in Los Angeles, the institution’s main role is “providing leadership and oversight and administrative support for this large network,” Dr. Currier says.

“That willingness to take this on and provide support across multiple administrative units within UCLA has made this work possible.”

The department of microbiology, immunology and virology at the David Geffen School of Medicine at UCLA also ranked fifth among such departments nationwide in funds received.

For Department of Neurosurgery Chair Linda M. Liau, MD, PhD, MBA, being a leading recipient of NIH grants – No. 3 in the nation within the discipline -- is about more than the dollars provided.

“It's the stamp of approval from the NIH, because these types of grants are so rigorously peer-reviewed,” Dr. Liau says. “People get funded based on the strength of the science and that, itself, is very powerful in terms of showing that our research is scientifically valid and meaningful and hopefully will lead to future treatments.”

The grants fund research that leads to real scientific advances, she says, and these scientific advances lead to additional funding. Findings discovered through pre-clinical NIH grants have gone on to generate large clinical trials within the department ultimately funded through industry and other sources, Dr. Liau says.

“Within our group, there have been multiple patents and other things that have come from that initial NIH funding,” she says. “So obviously, the more we have of it, the bigger the engine in terms of driving further innovations down the road.”

Being part of an institution such as UCLA — with a medical school, hospital and university all on one campus — supports innovation and collaboration in research, she says. “The advantage we have here is that I can walk down the street and talk to my engineering colleagues when I need to say, ‘Well, I want a device for this,’” she says. “I think that's what's been helpful and probably part of the reason why we do so well in NIH funding. I do brain cancer vaccine research within a neurosurgery department within a medical school, that's within a world-class university, and we're all in one place.”

Supported by the NIH’s Brain Initiative and the National Cancer Institute’s Specialized Program of Research Excellence (SPORE) grant, Dr. Liau is collaborating with research faculty in neuroscience, oncology and immunology to develop those brain cancer vaccines and other novel treatments for brain diseases. Engaging in research also makes her more effective bedside, she says.

“Understanding the biology of brain cancer makes me a much better clinician in trying to figure out what's best for the patient, because I know about which clinical trials they might consider, what would work, what wouldn’t work, what has failed in the past,” she says. “Because we are an academic medical center, that’s what sets us apart from the community hospitals — we’re the ones that develop the guidelines and the treatments, not just the people who implement them.”

In addition, the Neurosciences Department ranked 11th among such departments nationwide in federal funding received.

In the Department of Urology, NIH grants fund a range of research, from “very basic bench science” to translational research to clinical trials to population health and implementation science, says department Chair Mark S. Litwin, MD, MPH. “The NIH funding that supports us in urology covers the waterfront of discovery,” he says.

The department has received the NIH’s Specialized Program of Research Excellence (SPORE) grant funding for prostate cancer for more than 15 years, which has supported studies into early and advanced stages of the disease, says Dr. Litwin, who is also a researcher at the UCLA Jonsson Comprehensive Cancer Center. “Two of the life-changing drugs for men with prostate cancer— abiraterone and enzalutamide — came from research and researchers working at UCLA. Much of our prostate cancer funding comes through this NIH program, and has dramatically changed the face of prostate cancer management,” he says.

SPORE also funds the department’s work in precision medicine, using genetics, genomics and whole-exome sequencing to treat patients with prostate, bladder and kidney cancers. The department’s other NIH-funded studies include explorations of focal therapy for prostate cancer, which involves treating only part of the prostate gland, as well as research on the effect of diet, particularly omega-3 and omega-6 fatty acids, on prostate cancer prognosis.

Another NIH grant, which Dr. Litwin leads with Deborah Krakow, MD, chair of Obstetrics & Gynecology, is supporting “the teaching mission of our institution” by training fellows to conduct outcomes research in urologic and gynecologic oncology.

Like his neurosurgery counterpart, Dr. Liau, Dr. Litwin takes great pride in UCLA’s status as a leading recipient of NIH funding and underlines how meaningful such grants are to working researchers.

“The sine qua non of success in academics is to secure an NIH grant, which is extraordinarily validating for the scientist,” he says. “Not just for the science, but existentially for the physician-scientist or scholar, because it's the ultimate imprimatur of importance and validity of one's work.”

When Sherin U. Devaskar, MD, learned of UCLA’s second-place NIH ranking — and the ninth-place national pediatrics ranking of the Department of Pediatrics, of which she is executive chair — she was “over the moon.”

UCLA’s Department of Pediatrics is relatively small compared to some other academic institutions, she says, which makes its high ranking particularly meaningful, as the numbers of individual faculty and trainees conducting research at a given institution are not accounted for in these rankings.

“We are being compared in the ranking to places with much larger numbers of faculty,” she says. “Our department is not among the larger ones on the ranking list. ...That’s what gives us a moment of pride and helps with the morale of researchers who are toiling away, trying to help prevent or find a cure for disorders affecting children.”

The department’s federal funding supports a variety of studies, such as childhood obesity and diabetes, pediatric cancers and COVID-19 transmission and the effects the virus might have on childhood development. Funding also supports the study of rare genetic disorders that affect a handful of children leading to complex diagnostic testing, development of gene therapies, as well as other significant aspects of mother-and-child health.

“We've been trying to prevent children's disorders, so they are healthy and grow into healthy adults,” Dr. Devaskar says. “But also we're looking at the mother-baby relationship, because what we've discovered is there are little molecules in blood that can hint that there's something not quite right even before the child or the mother presents with symptoms clinically.”

Like other department chairs at UCLA, Dr. Devaskar is moved by the validation of excellent science conveyed by NIH funding.

“Once you get NIH funding, it generates a sense that you’ve arrived,” she says. “These grants are really a sign of scientific creativity and talent, but also a sign of investment. Because the more you invest, the more you're going to reap at the end. It’s almost like sowing seeds and waiting for the plant or tree to grow, and once grown, provide shade to others.”

Dr. Devaskar has seen scientific research during her career bloom into life-changing results for children.

“Leukemia was thought to be incurable at one point, and now we say that its outcome is much improved. With gene therapy and early diagnosis, many childhood disorders that were considered incurable are leading to healthier adult lives. This would not happen without science,” she says. “I'm a neonatalogist. As a clinician and as a scientist I have seen science lead to cures for premature lung disease, acute presentation of pulmonary hypertension, parental nutrition associated with liver disease, improvements in neurodevelopment, and many more miraculous discoveries that have positively impacted the lives of children.”

Being part of a university so highly esteemed in the eyes of the NIH is good for everyone affiliated with UCLA, Dr. Devaskar adds.

“Being ranked so high reflects the trust and funds that NIH is bestowing upon UCLA, and that also is a recognition by peers, because you don't get these grants easily,” she says. “The grants go through a tremendous peer-review process — and peers are the best critics. It also reflects the institutional investment in ensuring science makes a difference to health. It gives me so much pride to belong to an institution that ranks second in the country.” 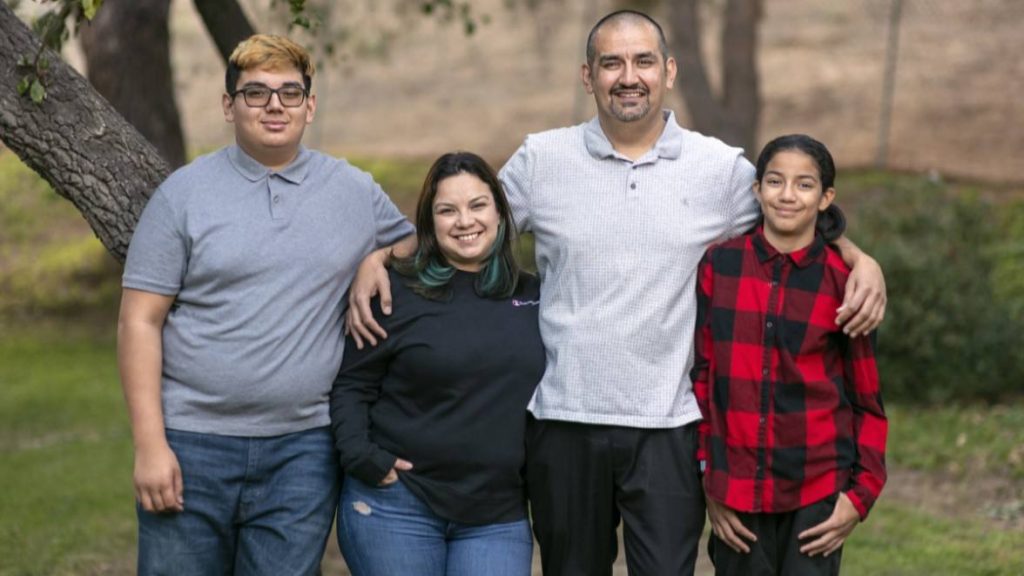 Given 2 years to live, a patient with colorectal cancer gets his life back through a clinical trial, leading-edge technology

Lazaro Barajas will be honored as a Laker For A Day, for his courage and determination

‘We have a very large clinical trial profile which allows us to have access to novel therapies and new treatment strategies,’ says Dr. Ritu Salani