After spending much of his early life in hospitals, Jackson Verner lived out his dream as UCLA Kid Captain, charming everyone along the way.

Sara Verner tried to keep it together as her 5-year-old son Jackson lived out his dream as UCLA Kid Captain for the Bruins’ matchup with Oklahoma at the Rose Bowl. But seeing the unbridled joy on her son’s face and the spring in his step as he bounded from one tailgate event to the next, roamed the sidelines during pre-game warm-ups, and took to the field for an introduction that earned him a standing ovation from the crowd of more than 50,000, Verner struggled to hold her emotions in check.

“It was really hard not to cry the whole time, to be honest,” she says.

Jackson Verner has spent much of his young life as a hospital inpatient. After Jackson suffered a series of strokes in 2017 that paralyzed the entire left side of his body, doctors told Sara Verner that her son would need at least six months of in-hospital rehabilitation and might never regain his full gait, if he could walk at all.

“I said no, he’ll walk out of here, I promise,” Verner recalls. “You don’t know this kid.”

After six days of rehab, Jackson walked out of there. It’s no wonder that as her son ambled around the Rose Bowl grounds — decked out in his UCLA T-shirt and black UCLA cape as he wagged his UCLA foam finger, chatting up everyone he met — Sara Verner, who has raised Jackson as a single mother, fought back tears.

“He has sheer determination,” Verner says of her son. “If someone says he can’t do something, he’s going to figure out how he can. He is also the sweetest spirit, and I commend him for that, because no one would blame someone for having a bad attitude after all he’s been through.”

Jackson Verner was born as a preemie at 28 weeks and 4 days. At five-and-a-half months he had heart surgery, and for nearly three years after that he endured nightmarish symptoms, with episodes that included screaming, vomiting, not eating for days and then sleeping for 40 hours straight. He experienced cluster headaches involving the trigeminal nerve — known as suicide headaches for the excruciating pain they cause, with no meds able to provide relief. Desperate for answers, Sara Verner took Jackson from one medical facility to another. She was told her son would be fine — he likely had a virus, or was merely constipated. But she knew it had to be more.

At her wit’s end, Verner made the nearly 100-mile trek from her home community of Murrieta, in southwestern Riverside County, to UCLA Mattel Children’s Hospital, where Jackson was admitted in May 2017. There, it didn’t take long for doctors to discover that Jackson had a brain tumor, and that the ventriculoperitoneal (VP) shunt ­that had been placed after his heart surgery more than two years earlier had malfunctioned and was contributing to the symptoms. In July, Jackson underwent surgery to remove the VP shunt — a medical device designed to relieve pressure on the brain caused by fluid accumulation. After spending most of his first three years in hospitals, he hasn’t had to be readmitted since his discharge later that month.

Verner credits her son’s UCLA neurosurgeon, Dr. Aria Fallah, and neurologist, Dr. Raman Sankar, with setting her son on the right path. “Both of them figured Jackson out pretty quickly,” she says. “Taking out the shunt alleviated a lot of the symptoms. And they really advocated for Jackson in a way that we hadn’t experienced at any other facility. They were intent on figuring out why this was happening and getting him a quality of life he hadn’t had before.”

Jackson’s fourth birthday was the first he had celebrated outside of a hospital. To commemorate the occasion, Sara Verner decided to start a tradition — to fundraise each year around Jackson’s birthday to benefit UCLA Mattel Children’s Hospital patients. When Jackson turned 4, in June 2018, the family raised enough for 1,800 Wubbanubs — baby pacifiers with stuffed animals attached. Last June, a month-long toy drive culminated in a U-Haul full of toys being brought to the hospital.

“I decided that we were going to give back and increase the goal every year, because those kids and their families who are at the hospital for long periods of time, like Jackson was, really need it,” Verner says. “They go through so much, and bringing them a little joy is so important.”

During the toy drive, a group of UCLA student-athletes joined with Jackson to record a promotional video that was posted on social media platforms. Moved by Jackson’s courage and charisma, participants from the football team told Sara Verner they wanted Jackson on the field with them as their Kid Captain. Verner didn’t know what that was, but she knew her son would love nothing more.

The first time Jackson had attended a UCLA football game, he wasn’t content to sit in the stands. “He kept saying, ‘I want to go on the field,’ ” Sara Verner says. “I had to tell him that’s not how it works.”

For the Oklahoma game, that’s how it worked. As Kid Captain, Jackson and his guests — including his mom, grandparents, and the family of Jackson’s best friend — were treated to a special game-day experience. It started at the UCLA Health employee tailgate, where Jackson ate, played cornhole, and charmed everyone who crossed his path — cheerleaders, members of the spirit squad, and UCLA Health staff, including some who had contributed to his hospital care. Taking the field as the players prepared for the start of the game, he was mesmerized by how close he was to the action. Jackson’s big moment came during a timeout in the first quarter, when he stood on the field as the public address announcer recounted his journey, to loud applause from Bruin fans. 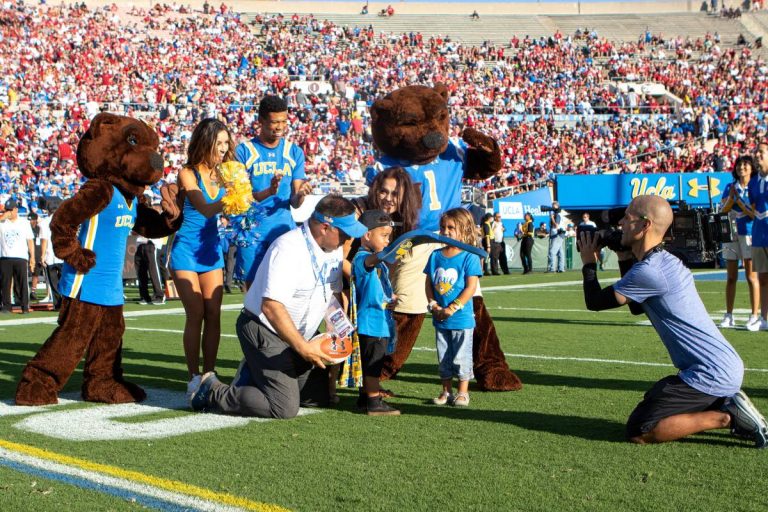 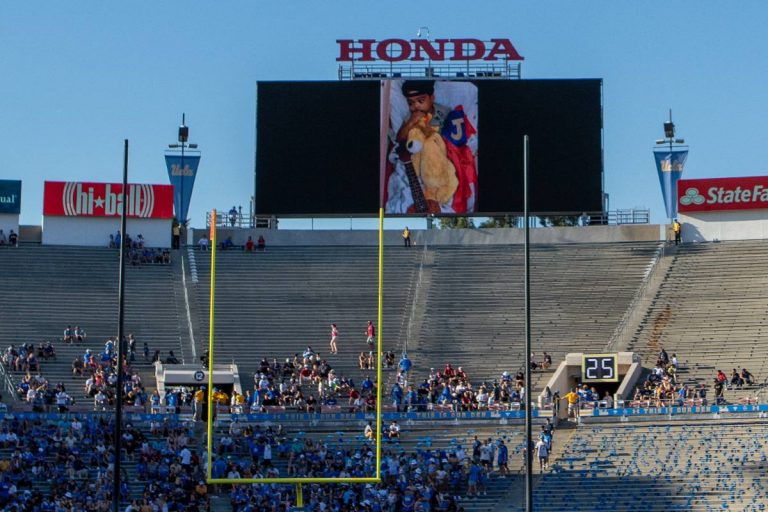 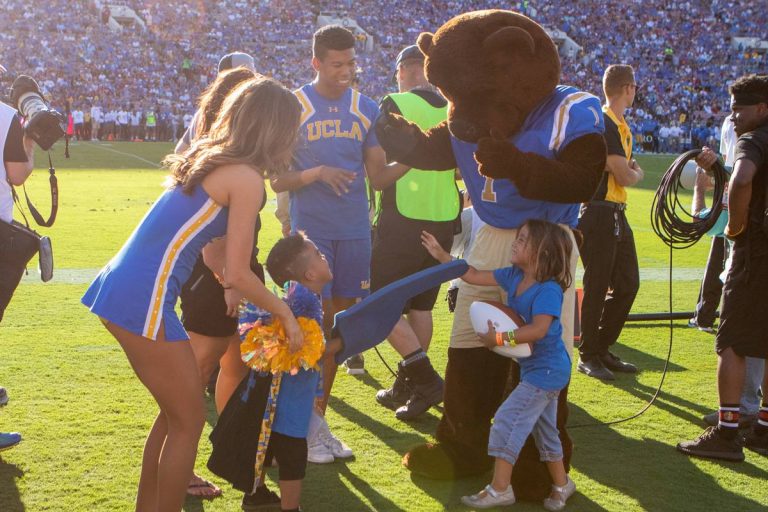 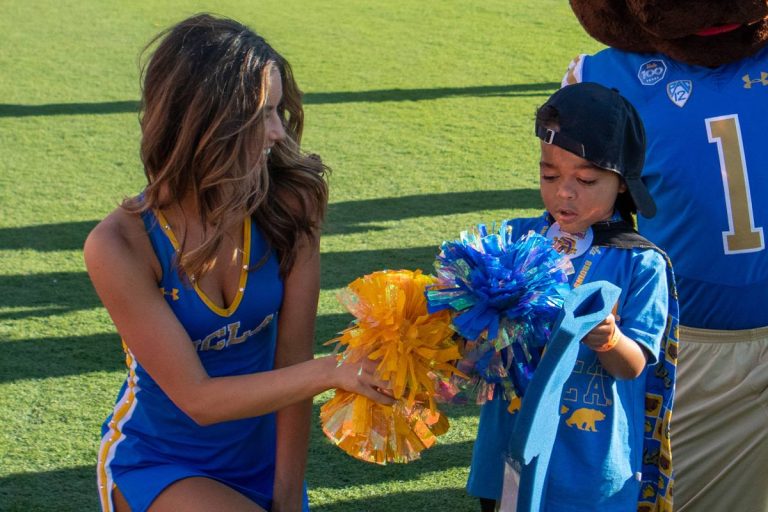 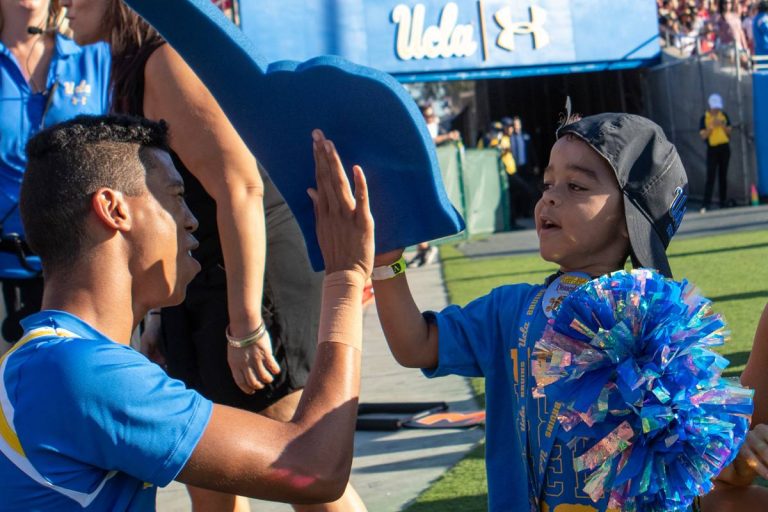 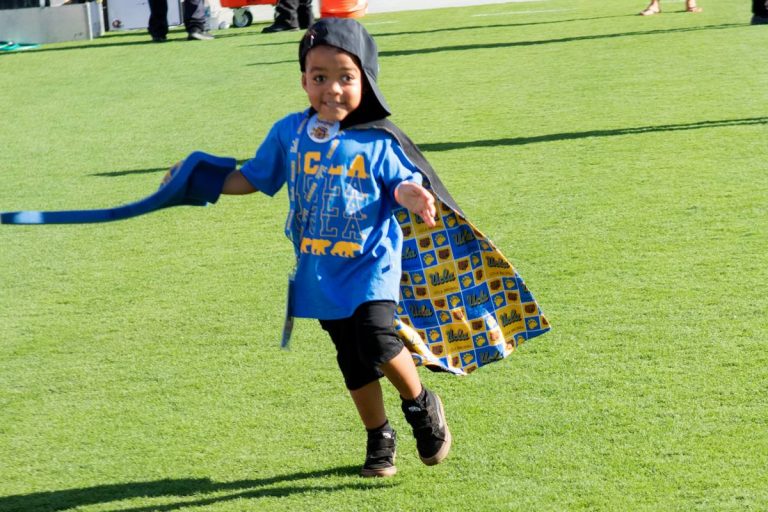 Sara Verner has taken her son to each Bruin home game since. “He’s a huge fan,” she says. “He enjoys it so much, and for me, it’s a chance rebuild in his life the memories he was robbed of — to give him the childhood that he didn’t have for so long.”

Jackson’s brain tumor remains inoperable; for now, there are regular scans to make sure it hasn’t progressed, along with intensive physical therapy and pain management. But considering what life before UCLA was like, Sara Verner is thrilled. “I get to see the magic in him now,” she says. “He really is the happiest kid, which is a testament to his fight and to the human spirit. I’ve committed that with this second chance, we’re going to make lasting memories.”

I met him and his mother while my daughter was there. So friendly and he was running around the halls so happy. We got news my daughter would not regain her motor function after a spine tumor and they give us hope to not give up! What a strong and beautiful family.

The stomach flu is different from the actual flu, and typically arises from infection with a different set of viruses 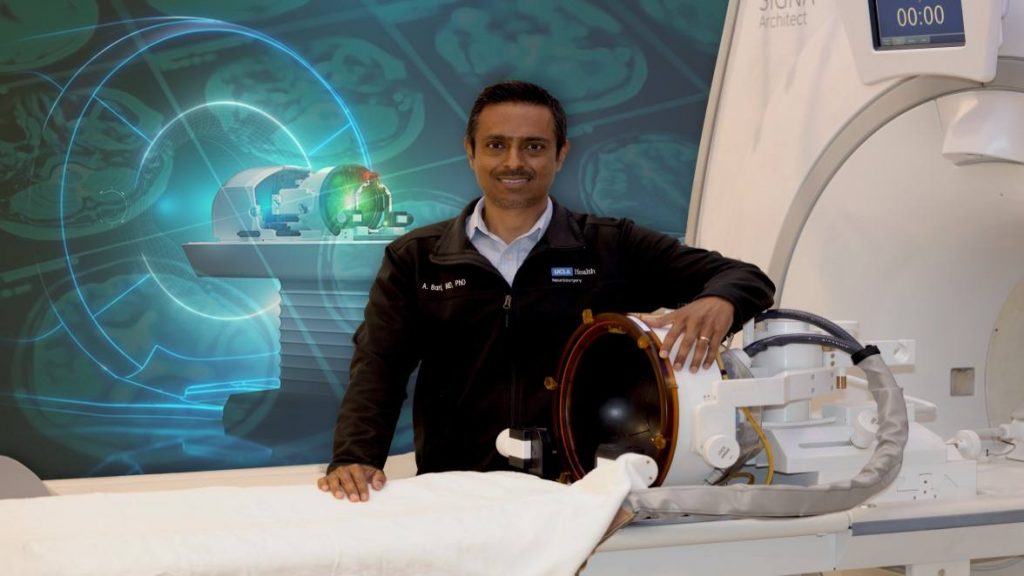