I had a hole in my head! 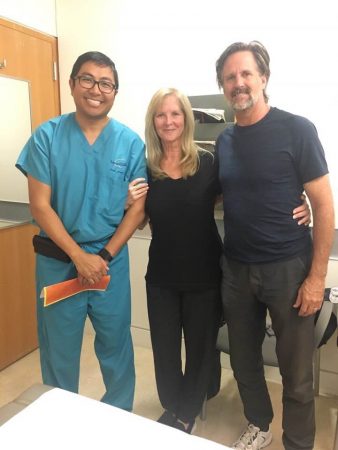 So, an interesting thing happened to me 65 days ago... I had brain surgery! More specifically, a middle fossa craniotomy to correct a condition I had been suffering from for five years called Superior Semicircular Canal Dehiscence or SSCD. The condition is caused by a hole in your balance canal upon which the brain rests so basically instead of sounds coming into your head and going out like they’re supposed to, they go up through this hole to your brain and rattle your world.

While this was not a life-threatening condition, it was definitely a life altering condition. My world had become smaller and smaller, I could do fewer and fewer things and finally the time came when I decided enough was enough and I was going to go through with this surgery which was the only thing that could possibly help. There were many years of indecision because you don’t decide to do brain surgery lightly! But the one thing that I was never indecisive about was my choice of surgeons and hospital.

UCLA’s Dr. Isaac Yang, neurosurgeon, specializing in brain disorders and Dr. Quinton Gopen, ENT surgeon specializing in skull based conditions, performed what was nothing short of a miracle for me. So on this, National Doctors’ Day, I would like to sincerely thank Drs. Yang and Gopen, their staff and the entire team of nurses at UCLA who guided me safely through this journey and have given me a life back. I am forever grateful!