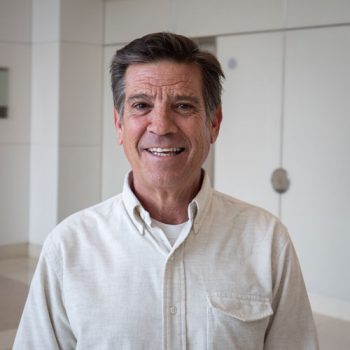 “If I had come in six months later there was nothing they could have done,” says Kevin Brophy, who came in to Ronald Reagan UCLA Medical Center for a colonoscopy and discovered he had stage four colorectal cancer. “I had a seven centimeter tumor in my rectum. There are seven signs of cancer, and I basically had all of them. I blew off the signs because I didn’t like doctors. I went from being someone who had never been to the doctors to feeling like I now know every doctor at UCLA Health. They all say, ‘we’re here to help you, Kevin.’ I did radiation for six weeks, chemotherapy for six weeks and had surgery in December of 2013. The cancer popped up again in 2017 and I did 11 chemotherapy infusions. My scan in July of last year was really clean. It was cancer-free. I made it through the five-year battle and am on the other side. Everyone has been there to help me get healthy."

Genetics may soon change the look of breast cancer screenings

Ready for ‘All clear’

“My dad was 54 years old when he passed away,” says Porchia Toussaint, who was 31 when she learned her dad had stage 4 colon [...]