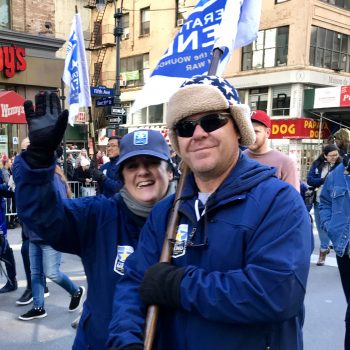 “We want to put an awareness out there about Operation Mend,” says Tad Steckler, United States Army Master Sergeant (retired) of Omaha, Nebraska. ”It can be hard to talk about personal things but it’s important for other wounded veterans and their families to know that they too can benefit from the program.”

With a total of 22 years of combat experience, Steckler sustained numerous injuries from parachute jumps and explosions that resulted in physical injuries to his back and neck as well as traumatic brain injury (TBI) and post-traumatic stress. His wife, Robyn, was researching programs that could specifically address his TBI and learned about Operation Mend. The specialists here were able to help with his constant headaches, which the couple called ‘life-changing.’

In 2017, the Stecklers went through Operation Mend’s six-week outpatient intensive treatment program for PTSD and TBI, offered in partnership with the Wounded Warrior Project. The program helps veterans and their family members learn together how to cope with the invisible wounds of war.

The couple learned how to communicate with their two teenaged daughters. Before the program, they believed they were protecting their kids by not talking about Tad’s injuries. Afterwards, they learned that it was better for their family if they provided honest, age-appropriate information.

“We learned a lot about communication and the roles of the caregiver and the wounded veteran,” said Robyn. “And they taught us strategies and techniques for managing the symptoms of TBI and post-traumatic stress.”

Claude Lagardere thought the pain in his throat was from something he had to eat. “I thought it was from a taco I’d eaten a few [...]