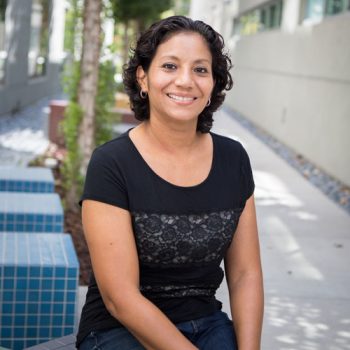 “Waiting for my biopsy results was the longest 10 days,” says 44-year-old Brenda Palacios, who was diagnosed with stage 1 breast cancer in March of 2017. “I had been getting yearly mammograms since I was 40, so they detected it on time. When I went to Dr. Deanna Attai’s office, she had a written breakdown, and I was able to visualize everything she was talking about. I started chemotherapy first, as opposed to a mastectomy, so they could shrink my tumor and then, hopefully, I would just need a lumpectomy. I walked out of her office and it was a sigh of relief. I expected the worst, but when I left it was like, ‘Okay, I can do this.’ So I did six rounds of chemo and the tumor was gone for the lumpectomy. I had another six months of chemotherapy because of the HER2-positive cells, and finished everything in April of 2018. I’m feeling better every day and I’m so blessed. I try to spread the word as much as I can, get your mammogram. I’m active, I’m healthy; breast cancer can happen to anybody. A mammogram can save your life.”

Claude Lagardere thought the pain in his throat was from something he had to eat. “I thought it was from a taco I’d eaten a few [...]