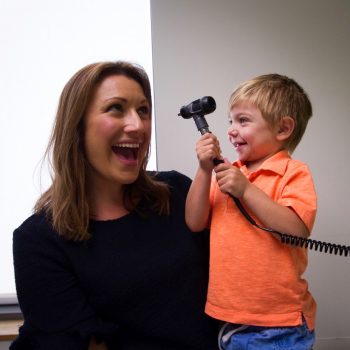 “My husband was a carrier for a very rare mutation of cystic fibrosis,” says Stacey Armato, whose son Massimo Armato is now 2 years old and sees Dr. Marlyn Woo at UCLA Pediatric Pulmonology and Sleep Medicine. “At five days old Massimo had surgery to remove a burst intestine. At 5 weeks old, he had stopped breathing due to an infection. And he’s had pneumonia, pseudomonas and some other infections since then. We’re hopeful, that as parents with a child who has a rare genetic disorder, that our team at UCLA Health can play a big part in research and development for a cure. We know we’re in good hands. It feels like we’re part of a small family that cares for Massimo like we do.”

Ready for ‘All clear’

“My dad was 54 years old when he passed away,” says Porchia Toussaint, who was 31 when she learned her dad had stage 4 colon [...]

“My new primary care physician was shocked that I hadn’t had a colonoscopy yet,” says 62-year-old James Weatherall, who chose UCLA Health for his medical [...]