Health risks of vaping in youth 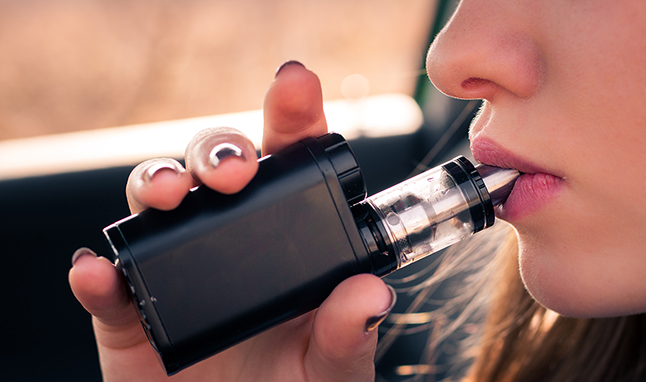 Vaping, or the use of e-cigarettes, is increasingly popular among young people in the U.S. Since most tobacco use begins during the teen years, there is a push to help prevent it — and the resulting nicotine addiction — from ever beginning. This starts by addressing the misconception among young people that vaping is not harmful.

Why is vaping harmful?

The Centers for Disease Control and Prevention (CDC) warn that e-cigarettes can be especially harmful during adolescence. They categorize the risks in these ways:

Brain risks: The brain continues to develop until age 25. The region of the brain that handles impulse control and decision-making is not fully formed in adolescence, so teens who vape may be more likely to start using other drugs. Also, the nicotine in e-cigarettes can damage the developing part of the brain that controls learning and the ability to concentrate.

Behavior risks: E-cigarette use is linked to use of other tobacco products like conventional cigarettes or cigars. There is also some evidence that vaping is connected to marijuana use. In fact, the device used for vaping may also be used to deliver other drugs.

Inhalation risks: Smoke from e-cigarettes is harmful. In addition to nicotine, it contains small particles that settle in the lungs. Flavorings that include diacetyl (a chemical that adds a buttery flavor) are related to lung disease. Other hazardous substances in vape smoke include benzene (found in the exhaust from cars) and heavy metals. These risks affect users of e-cigarettes and anyone who inhales their secondhand smoke.

Device risks: E-cigarettes use batteries that need recharging. Defective batteries in e-cigarettes have exploded while being charged, causing serious injuries to users.

The U.S. Food and Drug Administration (FDA) has identified companies that use branding similar to that for candy and juice boxes — designs meant to attract children and teens. Some of the vaping devices are discrete enough to be overlooked by a parent or guardian, looking like a small USB flash drive rather than a tobacco product.

In April, the FDA initiated a crackdown on those retailers who sell e-cigarettes to youth. The agency promised tougher enforcement of laws that prevent marketing and selling e-cigarettes to minors.

Parents are encouraged to talk early and often about the dangers of e-cigarettes and conventional cigarettes. The CDC recommends starting the conversation with a shared experience such as:

Kids, particularly teens, are more likely to respond to this type of conversation than if you start with “we need to talk,” which may put them on the defensive.

Once the conversation has begun, keep it going. While it may seem impersonal, teens communicate through texting. Try using that approach to stay connected.

You can also ask your child’s health care provider to initiate a discussion about the risks of vaping. Find a general UCLA Health pediatrics provider or make an appointment by calling 310-825-0867. UCLA Health also offers Adolescent and Young Adult Medicine services from doctors specially trained to meet the needs of youth and young adults age 12 to 25.

The epidemic of missing and murdered Indigenous women has existed for centuries, largely overlooked

Tips for a COVID-safe Halloween

‘We have quite a few tools in our toolkit to make this Halloween safe,’ says UCLA Health pediatrician and infectious disease expert Annabelle de St. Maurice

Whether due to genetics or a range of health conditions, some people are at increased risk of coagulation, which also plays a role in DVT