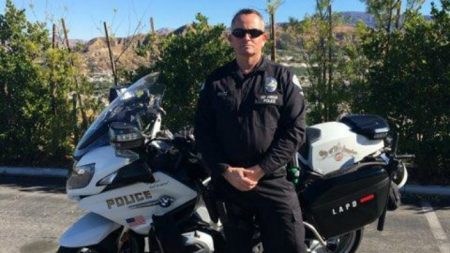 Phrenic nerve damaged in traffic accident made it difficult to breathe, potentially ending his career

Collisions are not uncommon for motorcycle officers who spend most of their time on the road. Officer Eric Holtz of the Los Angeles Police Department knows this first-hand.

In July 2014, Holtz was riding westbound on Saticoy Street towards Sepulveda in Van Nuys when a vehicle made a U-turn in front of him, causing him to hit the rear of the vehicle. He was ejected from his bike and went up and over the vehicle, landing on the right side of his body on the asphalt. He suffered bruises and soreness but no broken bones.

As the months went by, however, Holtz began to notice a shortness of breath, especially when he exercised. He didn’t connect the accident with his symptoms.

“I thought it was age-related,” said Holtz, who is now 48 years old.

Then, in December 2015, Holtz went to his local Urgent Care for what he thought was a severe cold. Instead, a chest X-ray revealed that his diaphragm and right lung were paralyzed. The doctor told him he had a phrenic nerve injury.  As a married father of three kids, he worried about how this condition would impact his home life and his job.

The phrenic nerves, located on each side of the diaphragm, control breathing by transmitting signals from the brain and spinal cord to the esophagus. The signals cause the diaphragm to contract, resulting in expansion of the chest cavity and inhalation of air into the lungs.

Initial damage to the phrenic nerves can occur a variety of ways—during certain types of chest or neck surgeries, epidural injections, nerve blocks or chiropractic manipulations or because of trauma. Though such damage is not always immediately apparent, the resulting scar tissue can, over time, compress the nerves.

A pulmonologist at another hospital suggested either a surgical procedure to pull the diaphragm down or implanting a diaphragm pacemaker, both of which could help him breathe better. To Holtz, these options sounded too radical; further, neither would actually repair the underlying problem.

Concerned that his physical condition might require him to take a desk job or even early retirement, Holtz began his research in earnest.

That’s what led him to UCLA Health’s phrenic nerve program, which offers a reconstructive surgery specifically to repair the paralyzed diaphragm. Even more promising, a 2016 UCLA study had already shown that 89 percent of patients who underwent phrenic nerve repair surgery had significant improvement in breathing and an increase in regular physical activities.

Holtz immediately made an appointment.

“When we first saw Eric, he was in pretty bad shape and suffering from shortness of breath,” said Dr. Matthew Kaufman, a voluntary assistant clinical professor at the David Geffen School of Medicine at UCLA. “After talking with him about his symptoms and giving him a series of tests, we confirmed his diagnosis and felt he could benefit from the surgery and get his life back.”

In October 2016, Holtz underwent the 2½-hour surgery at UCLA.

Kaufman performed the operation with Dr. Reza Jarrahy, an associate clinical professor of plastic and reconstructive surgery at UCLA. Although Kaufman’s primary office is in Shrewsbury, New Jersey, he and Jarrahy regularly team up at UCLA for the specialized procedure.

Together, they removed the scar tissue around the injured right phrenic nerve in Holtz’s neck. Then they took a nerve from Holtz’s right leg to use as a bypass around the injured area, creating a clear route for the nerve signal from the brain to the diaphragm.

After that, the wait began for the new nerve to regrow and form connections in the body, a process that can take a year or more.

“During this time, patients are encouraged to maintain a pulmonary rehabilitation program including cardiovascular exercise to rebuild the diaphragm muscle,” said Jarrahy. “Also, a physical therapist with specialty training can help with diaphragm re-training to strengthen the muscle.”

Before surgery, Holtz felt light-headed after jogging just one minute. But six months post-operatively, he was able to slowly run a couple of miles without noticing any breathing problems.

“Eric’s recovery is well ahead of schedule,” said Kaufman after seeing Holtz in December. “Even better, he can expect continued improvement over the next 2½ years.”

Each year, approximately 5,000 to 10,000 Americans suffer phrenic nerve injury, but many may not be aware of it. Neither may their doctors; the condition can be hard to diagnose.

“Sometimes, when the phrenic nerve is compressed and there is inflammation in the neck, the symptoms may be slow to progress over time and it’s not immediately clear what’s causing the breathing problems,” Kaufman said. “It’s important to go back through a patient’s history over an extended period time to look for that ‘aha’ moment.”

As for Holtz, with his recovery well underway, he’s happy that he did his research and found treatment. Now, he can continue his career as a motorcycle officer.

Some viruses will keep getting you sick even after you've recovered

She’s very skilled as someone who is used to getting stuck multiple times for IV. She did it once with confidence, grace and ease. Made [...]