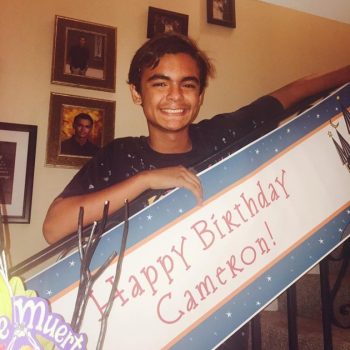 Last year in March, I received a call from the school nurse. Saying "C" is alright but I wanted to call because today in class he said he blacked out, didn't know what was going on. The Nurse said he possibly had a seizure, and to please take him in to see his doctor. I (mom) was a bit freaked out, knowing my son is high functioning autistic. I have heard of boy hormone changes & possible seizures during teenage years. I went to pick up "C" from school &  talk to his teachers to hear for myself what actually happened. That evening my son & I went for a walk to talk about his behavior, school, and what happen at school. I was trying to explain to my son about school, why he has been leaving his school materials behind & his behavior had changed into aggression. I just felt with all the progress we had made w/ "C" we were now going backwards. During our walk, all of sudden "C" grabs his forward and says "Mom, there it is again, this pain!" Here I was giving him a lecture on his behavior, grades, school, and I am thinking at first that he was just not listening to what I was saying. So, we walk a little more around the park, when I remembered what the school nurse said about his "seizures." I told "C" I thought we should go to ER. We got home, told his dad what was going on. His first responds was "really, you're going to be there for a long time." I just told him I needed to take C to the hospital; that something didn't feel right.

Off we went to the ER, my son & I. At first, I felt funny saying "oh my son may have black out at school and he's complaining of his head hurts." Sure enough, after a CT scan, the doctor comes back and says, "WE FOUND A MASS IN YOUR SON'S BRAIN. We will have to admit him to the children's hospital in Long Beach. We were shocked we couldn't believe it. Ok here we go. We spent 4 days in the hospital doing more CT scans, MRI, an EEG. My son was having seizures, you couldn't even see it. We had doctors in several departments see him - infectious diseases, oncology, neurology, neurosurgery. We were told it was possibly a tapeworm. The doctors explained what a tapeworm was and asked us whether we left the country (NO my answer) or whether C ate raw pork (NO my answer).

My though, autistic children are picky eaters & most of them smell their food first. No way did C get a hold of raw pork. So, while I was listening to what the doctors were saying, I tried to keep an open mind, and looked forward to having him released from the hospital to go home. He was taking seizure medications, which were altering his mood. We made more appointments to see other doctors, and scheduled his next MRI. During this time, C was put on medical home schooling since he couldn't concentrate, was having headaches and mood swings.

By June we had our next MRI done, saw the Nnurosurgeon, and got the same story again about the mass possibly being a parasite (tapeworm). Due to its location, doctors said they could not do biopsy nor operate on him. They told us we needed have C treated for the parasite by an infectious disease doctor. This doctor had the worst bedside manner. He told us right in front of my son, "I won't operate on him since I could kill him." As a mother, I obviously never insisted on my son having an operation so soon. I wanted to get more answers about what was going on in his brain. I understood that due to the location of the mass, it was very dangerous to operate. Ok I understood that, but I asked the physicians it there was any way they could help C. "This is taking over my son's life. He's missing school, cannot play sports." I could not understand this ... The doctors were just going to sit and watch this thing evolve in C's brain. Upset, I said, "we can send a man to the moon, but you can help my son." We stopped seeing that doctor. We saw the infectious diseases specialist, and we agreed to treat it as if was a parasite, but I knew that was not the entire story. So my son received a 2-week supply of antibiotics and prednisone, knowing prednisone is another medicine that alters my son's mood. Results from the 2-week treatment showed no change... the mass was still there, slightly growing. We were also told if it was brain cancer, we would see the tumor growing more rapidly.

We went in search for a second opinion at Children's Hospital Orange County (CHOC). We also continued to see C's neurologist in Long Beach whenever he had a need for seizure medication. At CHOC we found a new neurosurgeon, who had a much better bedside manner, but again more MRIs were needed to observe the tumor's progression due to its high risk - the tumor location was down deep in the brain folds. The doctor explained it much better to us, and of course he didn't want to damage our son's brain. We had to trust him, but my son was still not feeling good. He was not himself, seizure medications made him moody and withdrawn. Our neurosurgeon referred us to see a neurologist at CHOC. But once again, we felt we weren't being heard. They asked us to come back in 3 months, and told us they thought our son simply fainted, he had no seizures, and that the tumor was only "almond size."

Oh man! I had it! So, we left again in tears... by the time 8th grade started September 2016, we still had no name for this mass in my son's brain, and he was still on seizure medication. I did not want him medically home schooled. The school that my son was in was very supportive during that time. As parents, we wanted our son to be in school during his 8th grade. Prior to all this knowledge I was in tears crying to my husband about our son's moods & aggression that was getting out of control. Now, knowing that there was something in his brain, we resorted to medication to get him pretty much leveled out. But my boy kept saying, "mom, I feel funny. I don't feel good." I was sending him to school every day, but would have to pick him up by noon almost daily because he wasn't feeling well. He had another outburst in November, and I was in tears again. Our son had turned 13 in the beginning of November. We had a birthday party for him. My son's boy scout leader talked to us about what was going on... My husband and I told him the entire story and explained that we didn't know where else to go. Within a couple of days, he texted us with a friend's contact information and said, "this person might be able to help you guys out." I couldn't image or expected that my boy was going to have to live like this and be on medication for the rest of his life. Or just have to wait until he was an adult to be operated on. As I sat at home crying, lost, my husband reminded me that we never made that call to follow up on that text message. I said to him, "we'll probably just get the run around again." But we decided to call. Sure enough, this person knew several doctors, and she was on it, making phones and reaching out to Dr. Fallah at UCLA. We had previously seen a UCLA neurologist at CHOC, but no one ever mentioned Dr. Fallah.

Within the following week we met with Dr. Fallah. He explained that he could do laser surgery & biopsy. We were so excited and in tears. I knew it this was it. I was so excited I wanted to sign the papers right then. But we had to wait to go through the entire process... Ok, I said to myself. My son had a look of relief. He wanted his life back. Let's just say by December 23 2016, his laser surgery was scheduled. What a Christmas gift! On that morning after admitting him into hospital, walking way from my son for surgery I cried for 2 hours. My husband & grandparents were with me. We waited 4 hours for the surgery to be completed. It took 1/2 a day. Yes, it was success! Laser, in lay man's terms, fried that tumor killing off the cells. It is a process as the tumor doesn't die off over night. But I believed this it was going to work.

We met with Dr. Fallah after 2 weeks and got the results of the tumor, "Olifoendroglioma Low Grade 2" WE FINALLY HAVE A NAME! YES, We found the right doctor who had a new style of technology that was working. By March 2017, the tumor has shrunk down to 1/2 its size. My son had been off all seizure medication since February. He had not more seizures.

My son is a high functioning autistic diagnosed before 2 years old, adopted as a newborn. Without any prenatal care, he has had to fight throughout his life so far. Learning how to speak, working with behavioral therapists. By 6th grade, my son was fully included in general education, doing so well by mid 7th grade.  There was no way, as a mother, that I was going to accept to have my son live with a tumor in his brain. Our family is forever grateful to Dr. Fallah and to our friend for helping us in this journey.

How parents and caregivers can prevent child sexual abuse

Tips from Stuart House, a program of the Rape Treatment Center