Parents with PTSD shouldn’t keep kids in the dark 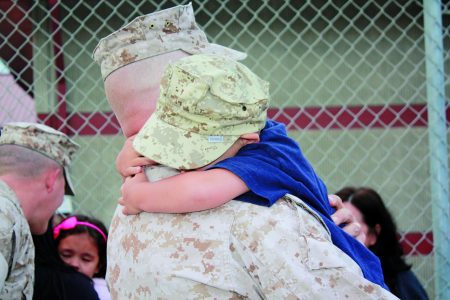 Parents, if you have post-traumatic stress disorder (PTSD), don’t keep it from your kids. Talk to them.

That’s the message this June, PTSD Awareness Month, from Tom Babayan, a licensed marriage and family therapist at UCLA. Babayan, who helps veterans communicate with their children about their PTSD symptoms, says these conversation can be powerful. His advice applies not just to veterans, but anyone with PTSD.

Being open with children about PTSD symptoms can help them gain perspective at a time when they may be feeling afraid or worried or be blaming themselves for a parent’s moodiness or emotional distance.

“The emotional numbing or avoidance behavior common in PTSD – kids will notice that. Kids can misinterpret that as lack of interest and create all kinds of misinterpretations,” Babayan said. “Irritability is another one that can be problematic. Kids may need a little explanation of what’s going on there.”

Children don’t need to know details about the source of the trauma, he says, but they do need to know about the PTSD-related behavior that a parent might be exhibiting. Here’s a kid-friendly explanation: “Mom is having some bad memories once in a while, that’s why she seems irritated. It’s something we’re working on.”

“Keep in mind the age, and perspective, of your child,” said Babayan, who is based at the Nathanson Family Resilience Center at UCLA’s Semel Institute for Neuroscience and Human Behavior. “A lot of times kids are asking less about what actually happened, and more about the present moment; they’re concerned about who’s going to take them to baseball practice. Parents can imagine what’s important to their child – and if they aren’t sure, explore it.”

Other strategies for parents coping with PTSD:

1) Take time to come up with appropriate language. You can say, “That’s a good question and I want to think about it.” Or, “I want to talk with your dad about it.”

2) Establish a two-way communication channel. Ask your child questions about their reactions to what they’ve noticed about you and what you’re telling them.

3) You don’t have to be perfect every moment. Perhaps you didn’t feel well enough to attend a school event as planned. You say, “You know, I wasn’t at my best, but I’ve been trying to do better.”

As Babyan said, without information, kids can blame themselves.

‘People may see their behavior as excessive or disproportionate, but they still have a hard time controlling it,’ says Emanuel Maidenberg, a clinical professor of psychiatry at UCLA Health