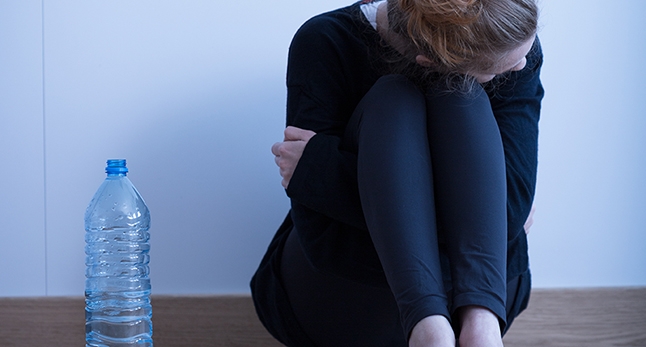 Anorexia nervosa or anxiety. Anxiety or anorexia nervosa. When it comes to treating people who struggle with both anxiety and anorexia nervosa, or the obsessive desire to lose weight, too many doctors focus on one condition or the other.

That’s a mistake, say UCLA experts in the treatment of eating disorders.

“People with eating disorders have very prominent anxiety,” said Dr. Jamie Feusner, director of the UCLA Obsessive-Compulsive Disorder Intensive Treatment Program. “It may be driving a lot of the symptoms they have.”

Feusner is now recruiting for a brain imaging study that could help researchers learn more about this circle of anxiety and anorexia nervosa, specifically how being in an anxious state affects the brain’s ability to experience reward, and how that relates to a person’s path of recovery.

The study will explore the relationship between the brain circuits involved in reward and those involved in anxiety. Those with anorexia nervosa are often anxious, and being in this state might diminish their brain’s ability to experience reward (the good feelings that people usually experience when, for example, they get a good grade, or win a game, or are awarded money). In addition, for some suffering from anorexia nervosa and anxiety, controlling his or her food intake or doing compulsive exercising might provide a sense of control, which can relieve the anxiety and might actually become rewarding in and of itself.

To date, the “dichotomous thinking” on this topic – treat the anxiety? treat the anorexia nervosa? – has impeded diagnosis and treatment, Feusner said. It’s not as if patients either have anxiety issues or they have anorexia nervosa. The conditions are tightly intertwined in a complex way that varies from person to person.

The study would build on what physicians are now learning about anorexia nervosa and anxiety. That additional understanding could help people with other disorders as well.

Take obsessions and compulsions, for example, which are symptoms that not only people with obsessive-compulsive disorder experience, but also many with eating disorders and those with other related problems such as body dysmorphic disorder. “Compulsions are often driven by anxiety, but at the same time perpetuate it, so if you treat compulsions, you treat anxiety at the same time.

However, if you treat the anxiety, but not the compulsion, the behaviors do not automatically go away on their own. These behaviors become very ingrained and take on a life of their own.”
Learning more about the reward circuitry involved with anxiety is an important step in developing more effective treatments.

“Not only people with anorexia nervosa, but people in general who experience anxiety might have this reduced ability to experience reward when they are anxious. We need to have a better understanding of how these systems interact in the brain,” Feusner said. “Most clinicians recognize this complex relationship between anxiety and reward, but they don’t necessarily know how to deal with it.”

Michael Strober, Ph.D., director of the Eating Disorders Program at Resnick Neuropsychiatric Hospital at UCLA, has been studying the connections between anxiety and eating disorders for years. (Watch a video of him explaining anorexia nervosa.)

He beautifully sums up the quest to understand anorexia nervosa in a review article published in the International Journal of Eating Disorders:

“Simply stated, that to understand why in the long arc of human development some people thrive while others remain beholden to odd motives and self-defeating acts requires the subtlest appreciation of how complex processes shape behavior and self-concept; the complexity of human life, including its deviancies, is fact. So does it not stand to reason that broadly conceived approaches to behavior change should also occupy a prominent place in our attitudes about treatment when it comes to an illness that is emblematic of how challenging psychiatric treatment can be?”

Feusner reiterates the complexity of eating disorders, especially as they’re connected to anxiety: “When people are anxious, they’re less able to experience reward in terms of feeling excited or good even in doing simple things, such as looking forward to spending time with friends. If people are less able to experience such reward, there’s less of a positive motivation to get better. There’s less for them to look forward to.”

The new study could begin to unlock some of the clues to the lack of rewards, and the misplaced rewards, within anorexia nervosa and anxiety.

Every piece of knowledge gets them one step closer to helping more people.

Dear Doctors: My husband caught a cold this summer, and he swears the readings from his fitness tracker a few days before warned him that [...]