In a comparison of yoga vs. memory training, the clear winner is yoga 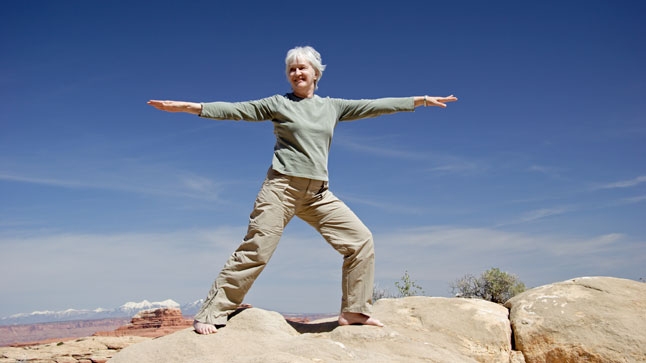 Crossword puzzles and other mentally demanding activities are well-known as memory boosters for older adults. But what if word games aren’t your thing? What if you’d rather learn to relax, doing something like yoga?

UCLA researchers found that yoga is better for both memory and mood. In a head-to-head comparison of yoga versus a type of memory training commonly used in people showing cognitive decline, UCLA researchers found yoga improved memory, depression symptoms and the ability to plan and focus attention to a degree equal to or greater than that in the memory-training group.

"All of the results suggest that yoga training provided broader benefit for cognition, mood and resilience,” said Dr. Helen Lavretsky, the study’s senior author and a professor in UCLA’s Semel Institute for Neuroscience and Human Behavior. "This is surprising, because yoga is typically viewed as an effective tool for stress reduction," but not for memory improvement.

For the study, which appears this week in the journal International Psychogeriatrics, researchers recruited 81 participants, age 55 and above, with mild memory complaints, such as forgetting names or misplacing items. Volunteers were randomly assigned to either 12 weeks of memory enhancement training or yoga and were followed over a six-month period.

The memory training group participated in weekly, one-hour sessions with daily, 15-minute homework assignments. Trainers taught techniques such as the use of stories to remember to-do lists or grocery lists.

The yoga group had weekly, one-hour sessions in Kundalini yoga, a form of yoga that focuses on breath and is appropriate for adults with physical limitations. They also received handouts and CDs for daily, 12-minute, at-home meditation practice using a yoga singing exercise known as Kirtan Kriya, which utilizes sound and finger movements to promote focus and concentration.

At 12 and 24 weeks of follow up, both groups showed significant, comparable memory improvement when given the task of remembering a list of words after a short delay. In measures of executive functioning and symptoms of depression, anxiety and psychological resilience, however, only the yoga group showed significant improvement.

Because the study group was small, the findings will need to be confirmed in larger clinical trials in the future, the researchers said.

The research builds on other recently published work by Lavretsky and colleagues.

* In a subsample of this study, 25 participants (14 in the yoga group and 11 in the memory training group), researchers used functional magnetic resonance imaging to document brain connectivity, structure, and chemical brain changes associated with the 12 weeks of active training. In the paper published May 2016 in the Journal of Alzheimer’s Disease, they found that yoga was as effective as memory training in improving connections between brain regions involved with verbal memory performance.

* In addition, Lavretsky examined changes in the brain structure and chemistry in the same 25 participants and found differences between the yoga and memory training groups. In short, the memory training group showed a trend toward increased gray matter volume (a good thing) and decreased brain metabolites associated with aging and memory loss.

Though preliminary, the results suggest that memory training can also produce neuroplastic changes in the brain associated with improved memory performance in seniors with mild cognitive impairment. Further research is needed to determine whether mind-body interventions like yoga yield similar changes and whether seeing this changes could take longer than 12 weeks. This study was published in the November 2016 Frontiers in Aging Neuroscience.

What's next? Lavretsky is currently testing Tai Chi practice in older adults with depression and is planning a larger study of yoga practices.

On Feb. 25 and 26, she’ll chair a two-day workshop for health practitioners titled “The Power of Breath in Clinical Practice and Mass Disasters” at UCLA’s Semel Institute.