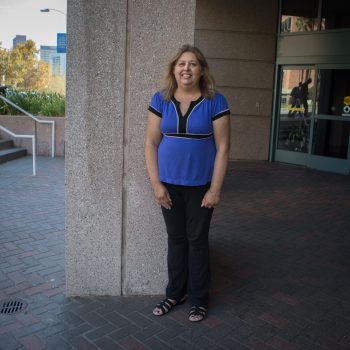 "I had breast cancer on one side, then it went to the other side, and a year later it spread to my pelvis," says Heidi Chance, a 52-year-old breast cancer survivor who came to Ronald Reagan UCLA Medical Center to have her adrenal glands removed because they were creating excess steroid hormones. "Even though the cancer tumors had been cleared out, my steroid level was crazy. Since my case was so rare, my doctor recommended Dr. Michael Yeh and Dr. Masha Livhits." Heidi had a simultaneous bilateral retroperitoneal adrenalectomy, which required two surgical teams to remove both adrenal glands at the same time, a first for UCLA Health. Heidi continues, "I thought it was a great idea because it cut the surgery time down from seven hours to three. I had a lot of risk factors, so the less I could stay under anesthesia the better. Now I feel like I can have a normal life again. I'm very thankful to my doctors."

Due to a marked increase in the number of younger adults being diagnosed with these types of cancers, the screening age has been lowered