A lot of things have changed for the better

“I am the president of the California Rural Letter Carriers Association, and that puts me in the public eye. That’s a big step for me — before the surgery, I probably wouldn’t have been able to do something like this because of my self-image. A lot of things have changed for the better.”

Chuck always saw himself as a reasonably fit guy. He was a big man, sure, but he was physically active, working out regularly and doing martial arts, and he generally believed he was in good shape. “I felt strong, I felt good,” he says. That is, until he landed in the hospital with congestive heart failure, after which his doctors limited his physical activity. His weight ballooned, and he gained nearly 100 pounds.

He didn’t really perceive that he was gaining weight, “but I would go to the store to buy some clothes, and I had to get increasingly larger clothes. So, that was very frustrating,” Chuck says. As his weight increased more and more, and his blood pressure rose and he tired more and more quickly, “I knew that something had to be done.”

After talking with his cardiologist, who told him his heart could withstand it, Chuck decided gastric-bypass surgery would be a good course for him. Besides his immediate health, there were other reasons: “I think the biggest thing that went into my choice was looking at my grandchildren, and I’m thinking, if I don’t do something, I’m not going to be around to watch them grow up, to be there for them and for them to know me.”

Chuck had the surgery, a Roux-en-Y, at UCLA in April 2004. Today, with the weight gone, he is off of his blood-pressure medication altogether, his cholesterol is in a very respectable range and he’s cut the amount of medication he takes for water retention by three-quarters. Chuck is back to his old physical self, walking every day and being active with his union. “

I am the president of the California Rural Letter Carriers Association, and that puts me in the public eye. That’s a big step for me — before the surgery, I probably wouldn’t have been able to do something like this because of my self-image. A lot of things have changed for the better,” he notes. While he’s adjusted to the restrictions of his food regimen — “You have to be aware of what you can and can’t have and the amount of things. When I get full, I’m full, and that’s it” — Chuck admits that he still misses a good piece of sourdough bread. “Oh, I love sourdough bread.”

Ultimately, though, the tradeoff between food and health is worth the effort, he says. “When I look at a 10-pound bag of potatoes, I’m thinking, my gosh, I was lugging around 10 of those every day. My life is so much better now than it was,” he says. “You know, when people perceive you in a certain way, you can tell. And I know I’m being perceived differently and more positively now. When you can reflect a positive image, I think that people around you pick up on that. And definitely losing the weight has been very positive. “I’d do it again in a minute.”

*Weight loss results can vary depending on the individual. There is no guarantee of specific results. Read full disclaimer »

A few days ago I saw Dr. Michael Robinson at UCLA Health in Encino. His bedside manner and professionalism while making me feel comfortable and [...]

I will forever be grateful to Dr. Chen and his team. As I am approaching my 18 month post-surgery [...] 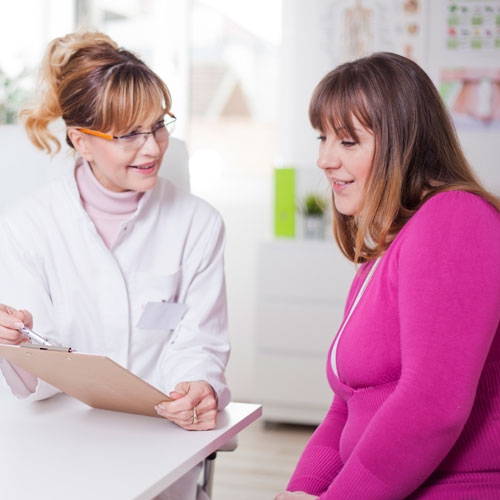 How obesity can affect a woman’s ability to conceive

You’ve likely heard about the health issues caused by obesity. It raises your risk for heart disease and