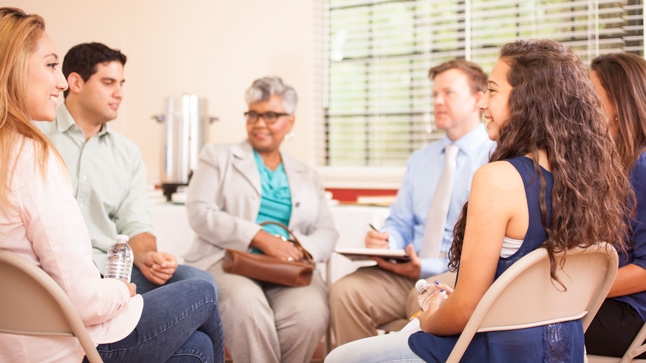 An estimated 43 million Americans – or 18 percent of the population – live with a mental illness, and many of them are facing it in secret. Some are even too ashamed to seek out the treatment that could help them.

“Stigma [around mental illness] is shrinking, but we have a long way to go,” says Thomas B. Strouse, MD, medical director of the Resnick Neuropsychiatric Hospital at UCLA. By working together to lessen the stigma, we can create a culture in which people are more willing to talk about what’s wrong, seek help and live healthier, happier lives.

The first week of October is Mental Illness Awareness Week, and at events around the country people are taking action to destigmatize conversations on mental health. Here are four ways everyone – from mental-health experts to celebrities to concerned community members – are working to shine a light on the challenges of mental illness:

1. Know the facts. Mental illnesses such as anxiety, depression, bipolar disorder and schizophrenia are real disorders with a biological basis. “People often believe that mental illness reflects moral weakness or lack of sufficient willpower – and that’s false,” says Dr. Strouse. “Psychiatric illnesses are just as real as diabetes or high blood pressure.” And just like physical ailments, there are proven treatments for mental illnesses too. Lack of knowledge may help explain surprising statistics like the fact that less than half of adults (41 percent) in the U.S. who have a mental illness received services to help them.

2. Shine a light. A little attention goes a long way. Dr. Strouse applauds celebrities like singer-songwriter Demi Lovato, who has been vocal about her experience with bipolar disorder, and actress Glenn Close, whose charity Bring Change 2 Mind aims to bring awareness to mental illness. Discrimination against people with mental illness is real. In a recent Behavioral Risk Factor Surveillance System survey, only 25 percent of adults who’ve had symptoms of mental health problems believed that others had sympathy for their situations. The goal is to reduce discrimination surrounding these illnesses, and the people they affect.

Dr. Strouse encourages everyone to try and share their personal experiences with mental illness. We are all moved by stories, he says, so when others are courageous enough to talk about their illnesses, the effect can be profound.

3. Join the cause. Groups such as the National Alliance on Mental Illness sponsor fundraising walks and other events across the country. Whether you are living with mental illness or are marching to support a family member or friend, such events are great ways to find solidarity and show support.

4. Speak up. If you hear someone make a joke or share misinformation about mental illness, you can choose to stand up and set the record straight. Remember that stigma often stems from misinformation or ignorance, Dr. Strouse says. “Many people aren’t fully aware of their biases. Rather than humiliating them or concluding they’re bad people, enter into an honest dialogue and examine your own blind spots.”

You just might knock mental-illness stigma down a peg.

To find a provider or learn about our mental health services, visit Resnick Neuropsychiatric Hospital at UCLA online, or call 310-825-9111.

Endometriosis is a condition where cells like those in uterine lining (the endometrium) grow and implant outside of the uterus. This often-painful condition is also [...]

Could you be at risk for inflammatory breast cancer?

Joe Biden’s history of stuttering sheds light on the condition