Is your teen’s smartphone literally a pain in the neck? 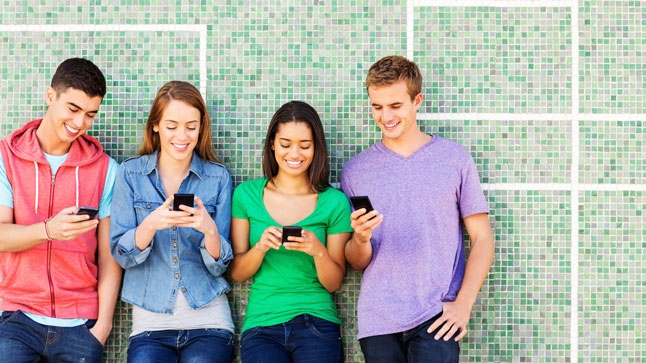 Today’s teens love their smartphones. Many parents, tired of competing for attention with the ever-present devices, would say cell phones are a pain in the neck. Turns out, those parents might be right.

Doctors who specialize in spine disorders report that more patients are complaining of a phenomenon sometimes referred to as “text neck” — neck and back problems caused by hunching over smartphones. “We see both back and neck pain associated with poor posture during phone use,” says Langston T. Holly, MD, FAANS, co-director of the UCLA Spine Center.

Stress on the spine
While plenty of adults are guilty of huddling over their phones, children may be particularly vulnerable given the amount of time they spend attached to their devices.

A 2015 study by the Pew Research Center reported that 88 percent of teens ages 13 to 17 have access to cell phones or smartphones. They use those phones frequently to visit social networking sites and exchange messages with friends. In fact, a typical teen sends and receives 30 texts per day, according to the report, and almost a quarter of the teens in the study reported going online “almost constantly.”

Too often, poor posture and smartphone use go hand-in-hand, which can be surprisingly hard on your neck, according to a 2014 study published in Surgical Technology International. Tipping the head forward and downward a slight 15 degrees is equivalent to adding 27 pounds of weight to your cervical (neck) vertebrae, the study found. A 60-degree downward gaze is comparable to hanging a 60-pound weight from your spine.

Poor posture can lead to neck and back pain, but teens might not make that connection right away. “Often people do not feel any pain while in a hunched position, in part because they are distracted by their current activity,” Dr. Holly says. “Later that day or in the following days, they may develop pain and stiffness related to sub-optimal posture.”

Protect your posture
Usually, neck pain from poor posture is just a form of muscle strain. “However, if it continues over a long period of time, it is conceivable that the joints and discs within the spine could wear out prematurely,” Dr. Holly adds. That degeneration of the spine could cause long-term pain and even require spine surgery.

To avoid lasting problems, remind your text-happy teen to follow these good-posture tips:

Learn more about spine health and treatments for back and neck pain at the UCLA Spine Center.

‘People may see their behavior as excessive or disproportionate, but they still have a hard time controlling it,’ says Emanuel Maidenberg, a clinical professor of psychiatry at UCLA Health