8No day is ever the same for Kayla Vandegrift, who supervises the nursing and technical staff. 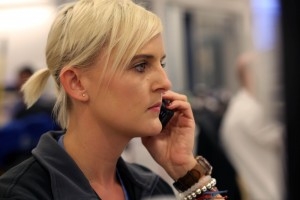 It’s not even noon and Kayla Vandegrift has been on her feet for five hours already. She has seven-and-a-half more hours to go on her shift. Inside the windowless, climate-controlled emergency department (E.D.) at the Ronald Reagan UCLA Medical Center, it’s difficult to tell if it’s day or night, or summer or winter, for that matter.

As a charge nurse, Vandegrift watches over everything and everyone in the E.D. like a cross between an air traffic controller and a mother hen: assigning nurses, conferring with doctors, inspecting rooms, and keeping tabs on the flow of patients.

“I like to keep busy,” says Vandegrift, who has been an E.D. nurse since earning her degree eight years ago from California State University, Chico. 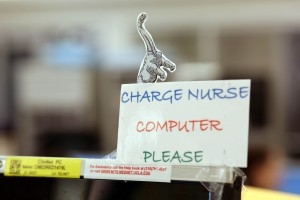 Busy is an understatement. Vandegrift typically begins her day at 6:45 a.m., about 15 minutes before her 13 nurses and five technicians arrive. It lets her get organized before huddling with her team at 7:00 to dole out assignments.

Standing at her command center, the 32-year-old California native calmly manages the swirl around her. She frequently checks her computer to keep up on each patient’s status and the doctors and nurses assigned to each. The department phone in her pocket rarely stops buzzing.

In the next moment a siren goes off and a red light on the ceiling starts swirling, signaling the arrival of an ambulance with a patient on board. A set of double glass doors bursts open, and in comes an emergency medical team wheeling a gurney with a 30-year-old male aboard. Despite being shot in the lower leg, he is sitting upright and calm. Vandegrift’s team assigns the man an alias — a trauma name—to protect his identity from outsiders. “We go through trauma names like they do with hurricanes,” says Vandegrift. “Letter by letter.”

Though considered seriously injured, the victim’s appearance indicates the wound is not life-threatening, and x-rays reveal a broken leg from the bullet.

Vandegrift dashes back to check on an intoxicated man who came in earlier in the day. “He was kind of out of control,” she says. “We had to call security to come and sit with him.”

A Stream of Patients in the Afternoon 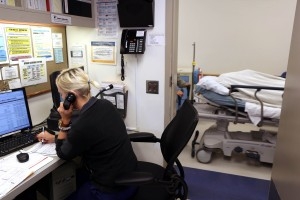 Like in any E.D., the task of triage is a big part of the charge nurse’s job. Vandegrift is the perfect person to manage it. She is serious and focused, sympathetic but firm. “We know that for everyone who comes in here, this is theiremergency,” she says.

Throughout the early afternoon, patients stream in regularly, including many in need of psychiatric care. Because Ronald Reagan UCLA Medical Center is one of the few hospitals in the area with psychiatric facilities, “we get dementia, geriatric psych, homeless, everything. They come because they’re suicidal or homicidal or can’t take care of themselves,” she says.

Breaks for nurses are mandated, and Vandegrift typically grabs one early in the morning. She’ll gulp down a homemade smoothie of almond milk, chia seed, strawberry, and banana. Lunch is at 1:00 p.m.

Late in the afternoon, the red light starts swirling again and a gurney bearing a motorcycle accident victim appears. Vandegrift quizzes the EMT and learns the bike was traveling about 45 miles per hour when the man went hurtling over a car. “I’m not 100 percent sure what happened to him,” she says. She consults with three trauma nurses and the victim is quickly rolled into the primary trauma room where three surgeons go to work.

A few more checks on patient statuses, a few more updates at the computer, and her shift comes to an end. It’s 7:30 p.m. The best feeling, she says, is when the patient outcome is a happy one, such as those times she has helped frantically pregnant women deliver in the E.D. But even when a patient is beyond saving, Vandegrift says that she and her team always walk away feeling that they have given their all.

“Today, our waiting room never had more than 11 people,” she remarks when asked to reflect on her shift. “Sometimes we have 25 waiting, with multiple traumas. This was not too terrible of a day.”

Endometriosis is a condition where cells like those in uterine lining (the endometrium) grow and implant outside of the uterus. This often-painful condition is also [...]

Could you be at risk for inflammatory breast cancer?

Joe Biden’s history of stuttering sheds light on the condition