For 10-year-old Liana Clayton, the bracelets she makes on her own help her cope with the heartbreaking reality of her mother’s breast cancer diagnosis.

“I wanted to help others,” said Liana. “This was something important to my mom and to me.” 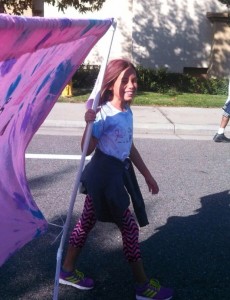 Her mother, Che, is battling a severe form of breast cancer. When Che learned of her fate, she said, it was difficult to tell Liana and her other daughter, eight-year-old Chloe.

“I didn’t know where to turn,” said Che. “I was getting all kinds of misinformation.”

She is not alone. Over the course of a lifetime, one in eight women will be diagnosed with breast cancer and the majority of cases are found in women over age 50. Fortunately for Che, a close family friend who had just finished cancer treatment pointed her to the Simms/Mann Center to get help.

As part of the UCLA Jonsson Comprehensive Cancer Center, the Simms/Mann UCLA Center for Integrative Oncology offers support for cancer patients like Che, including psychosocial services, spiritual care group sessions, nutritional coaching and much more. Most of these services are also provided free of charge.

The psychologists at the Center told Che that recently diagnosed cancer patients find it difficult to tell their family and friends about their life-altering disease.

What made it even more difficult for Clayton was the fact that she had to move closer to UCLA for cancer treatment, and her daughters had to stay behind in Murrieta, California nearly two -hours away.

After Che shared the devastating news with her family Liana was determined to show her mother all of the love and support she needed by giving back to the Simms Mann Center.

In order to raise the funds, Liana decided to turn her hobby into a business she named “Liana’s Looms of Love.” She began selling her bracelets at school, with the goal of raising $150. Each loom design, she said, isn’t easy and takes four hours to make.

But all those hours of working on the looms paid off. Liana exceeded her goal, as the support continued to pour in and she raised even more money for the Simms/Mann Center.

“I cannot believe that a 10-year-old child facing her mom’s illness could be so creative and philanthropic,” said Dr. Anne Coscarelli, founding director of Simms/Mann Center.

As Liana’s business grew she decided to craft new designs, and branch out to rings and little people figurines.

“I started designing original figures that included my favorite movie characters and human figures,” she said, “such as one of mom.”

The support for “Liana’s Looms of Love” poured in over the past several months. So far, the elementary school student has raised over $2,000.

Liana’s mother said, “It was all her idea and she did it on her own. It became a way of healing for me and everyone around me. Liana’s Looms of Love has helped us all feel happy that we could do something for Simms Mann Center, which has done so much for us.”