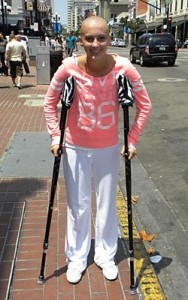 The doctors told Allie Newman that the pain in her right thigh was tendonitis, nothing to worry about. A little physical therapy and she’d be as good as new. Just one month later, in January, the 16-year-old avid skier and soccer player was diagnosed with an aggressive osteosarcoma in her right femur.

Her dad, Bob Newman, broke the news to his only daughter as she lay on her bed doing homework, just like she did on any other regular night. Tonight, though, everything would change.

“Just a few days before, she was skiing on a family trip, playing soccer and enjoying her teenage freedom. Now I had to sit and explain a cancer diagnosis to her,” Newman said. “That is not something you ever prepare for or anticipate having to do with your child.”

Newman said he and his wife knew being honest, open and supportive from the start was vitally important for all of them.

“We owe a huge debt of gratitude to her oncologist and surgeon,” he said. “On the very first call with me they not only compassionately and clearly explained Allie’s condition, but they also, perhaps more importantly, explained it in a manner that conveyed a positive confidence and understanding that we would successfully manage the situation.”

Cancer? At 16? Allie had just gotten her driver’s license and was halfway through her junior year in high school. How could this be happening? It was an awful lot for a teenager, even one as smart and independent as Allie, to take in.

“I started crying immediately,” Allie said. “I remember not knowing what was going to happen to me. I didn’t really know what it meant. But my dad told me it was serious and something we had to deal with, face straight on and we would get through it. There was no running away.”

Still reeling, Allie soon learned that she must undergo a grueling chemotherapy regimen that called for three- to six-day hospitalizations, followed by an extensive surgery that would probably result in the removal of part or all of her right femur, with six more months of harsh chemo afterward. She couldn’t attend Brentwood High School with her friends, and would be hospitalized periodically when her severely depleted immune system failed to protect her from infection. Visitors weren’t always welcome because any germ could potentially be deadly.

Osteosarcoma is the most common bone malignancy in children, although only about 450 cases are diagnosed each year, said Dr. Noah Federman, Allie’s oncologist and a researcher at UCLA’s Jonsson Comprehensive Cancer Center. Allie’s cancer was Stage IIb, meaning her cancer was extensive and aggressive, but had not yet spread to other organs.

“That was vital, because the most important factor in terms of her prognosis was whether or not her cancer had spread,” Federman said. “In Allie’s case we decided to give her chemotherapy up front, hoping to kill most of the cancer before her surgery.”

In the early 1970s, before oncologists started treating osteosarcomas with chemotherapy, patients with that malignancy had their limbs amputated as the conventional treatment. And 80 to 90 percent of patients died within several years when the cancer returned, usually in their lungs. Now, about 70 percent of osteosarcoma patients are long-term survivors.

Because Allie’s cancer was so aggressive and still contained to her femur, Federman and UCLA surgeon Dr. Jeffrey Eckardt decided to hit it with everything they had to protect her from recurrence. She has suffered many side effects, including severe nausea and hair loss, but is handling well the high doses of methotrexate, a drug that can harm organ function.

“I think she’s doing great and is going to do great,” Federman said. “It was tough for her. She had just gotten her driver’s license and was starting to assert her independence and we took that away from her, putting her through all this therapy. For adolescents, something like this is incredibly difficult, being faced with their mortality for the first time. But she is strong and has taken this adversity and turned it into something that has benefited her. She’s a really special person.”

“Allie has developed a resolve and inner strength that is amazing to see,” he said. “Unquestionably this journey has changed all of us. We’ve learned how to lean on each other and there are times when we lean on Allie for support as much as she leans on us. She has the ability to lift our spirits and the spirits of others around her as much as we lift her up.”

It’s true that Allie’s life has changed radically. She left school in January shortly after her diagnosis and won’t be returning until next January, halfway through her senior year. She has kept up with her studies through email and online resources, a tough task for someone who is hospitalized at least twice a month for up to a week, and then feels pretty lousy the next week or so. But she did it, and she’ll graduate with her class next June.

The first four months of her chemotherapy, prior to surgery, were brutal.

“Every side effect there was, I had,” she said. “It was really hard on me. I was throwing up every single day. I was on painkillers and nausea medications. It was kind of a guessing game about how to balance it all out. But we finally figured it out.”

Then came her surgery in April. When Eckardt went in, the cancer was still there—85 percent of it had been killed, but that 15 percent still living was troublesome. Eckardt removed Allie’s thigh bone and replaced it with titanium. To support the titanium rod, Allie underwent a complete hip and knee replacement. The new hip, thigh and knee assembly were drilled to her shin bone for support. And because there was still living cancer, Allie faces more chemotherapy until the end of November, with two additional drugs added to the conventional, three-drug chemo cocktail.

Following surgery, Allie was hospitalized for three weeks. Once she was able to get out of bed, she had to wear a body brace that reached from her waist down to her right ankle until early July. Allie is now in the midst of intensive physical therapy and has graduated from a walker to crutches. By later this fall, she hopes to be walking with just a cane.

The girl who once skied and played soccer and lacrosse and swam and dove competitively has been told she might never run again. Although that’s more than enough to turn any teenager into a blubbering mess or a sulky recluse, Allie has remained positive. And she keeps surprising her doctors, too. She was up and exercising her leg a week before predicted and plans to be able to walk down the street “just like anyone else” by next year. Every free moment is used working her right leg, making it stronger.

“At first it was really hard, being in the hospital and being really sick and not being able to see my friends. I’d see on Facebook that my friends were taking trips and going to parties and it was difficult,” Allie said. “I got into a deep hole, but after surgery I popped out of it. I have a long way to go still and I have to fight this.”

Along the way, Allie has discovered that her cancer diagnosis might not be all bad.

“It’s not that I feel lucky to be diagnosed with cancer, but considering everything, I’m pretty lucky,” said Allie, now 17. “A lot of people in my position lose their legs. Really, this is just 12 months of my life, a bump in the road. There is light at the end of my tunnel. I get to go back to my normal life. What I’ve learned through this has been pretty amazing.”

Right now, Allie thinks in terms of getting through each day, each week. The future is out there waiting, but it’s the present she’s focused on. She recently felt well enough to take a quick trip to San Diego and sat by the pool and visited Sea World. It was just so nice, she said, to “feel normal.”

Allie has decided to take a gap year after graduation because she missed all the crucial college prep that takes place junior year. And she’s considering a career in medicine.

“Experiencing, watching and benefiting from the teamwork and great dedication of the doctors, nurses, care partners and all other staff is beyond words,” Allie said. “It is something that has touched me deeply and something we often talk about.”

While she focuses on the present, thoughts of the future do creep in.

“I do imagine going back to school and what the first day of class will be like,” Allie said. “It will be so strange to see everyone again and be sitting in a classroom. This has been a life-changing experience and I’ve gotten so much support. People I don’t know come up to me and tell me they’re praying for me. That’s pretty amazing.”

‘We have a very large clinical trial profile which allows us to have access to novel therapies and new treatment strategies,’ says Dr. Ritu Salani