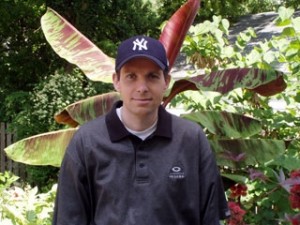 I was diagnosed with a rare spinal cord condition at the age of 31. I live in Columbus, Ohio, but was encouraged to find the best medical center for treatment. I began traveling around the country from hospital to hospital (including the Mayo Clinic, Mass General, the Cleveland Clinic, Cedars Sinai...) to see doctor after doctor in hopes of finding a treatment for my condition. While I was able to go to many of the most prestigious hospitals in the country, I found that the doctors I saw all had different opinions about my treatment plan. The treatment recommendations varied widely, but the appointments were similar in that they involved a rushed doctor entering the room to review my charts and films and then making a recommendation. I didn't know where to turn, but finally tried surgeries that did not stop the progression of my symptoms.

As the symptoms from my neurological condition continued to progress, I began reading medical research articles in journals published for professional physicians. Although I do not have a medical background, my father and I were able to piece together bits and pieces of the research that was included in the articles. My research led me to a publication by Dr. Ulrich Batzdorf at UCLA. This article was written in clear and understandable terms and described a treatment that I had never heard about.

After reading the research article by Dr. Batzdorf, I traveled across the country to UCLA Medical Center to meet with him. I went with some trepidation because of all my other experiences seeing neurosurgeons and neurologists. However, since the first time I met him I immediately knew that he was different from the other doctors that I had seen. He spent hours with me going over my treatment options, answering all of my questions and explaining his treatment plan to me. His thorough and logical approach gave me hope. Through a unique surgical procedure Dr. Batzdorf and his colleague, Dr. Langston Holly, were able to stop the progression of my symptoms. In addition to their medical expertise, Dr. Batzdorf and Dr. Holly always treated me with respect and as a person with feelings instead of just one of many patients in a caseload. I still have some nerve damage due to the symptoms that had progressed while I was searching for the right doctor, but I feel very fortunate that my research led me to Dr. Batzdorf and to UCLA.

Mike's history dates back to age 14 when he was discovered to have scoliosis, that is, a curvature of the thoracic or mid-spine that frequently is noticed by an accelerated growth during the teenage years. He underwent surgery back East, with metal rods placed alongside the entire back of the spine, and with fusion of the spine in a more normal position. Over time, though, he gradually began to notice some loss of feeling in his right hand, and muscle spasms in his right arm and leg, as well as an inability to perspire over the right side of his body. Spasms and painful numbness of the right leg increased after he developed acute appendicitis and had an appendectomy. Because symptoms continued to get worse and his spine had fused long ago, the metal rods were removed in the hope that this would permit better imaging of the spinal cord. A myelogram (a sophisticated type of X-ray that includes an injected dye) was performed followed by an untethering procedure of the lower tip of the spinal cord. Nevertheless he continued to get worse, with symptoms of numbness and burning in his lower extremities, as well as tightness and muscle spasms in his legs that gradually progressed to involve his hands as well. When Mike was first seen at UCLA, his examination showed a loss of reflexes in the right upper extremity as well as increased lower extremity reflexes, and diminished sensation in the right arm and in both legs. A new myelogram showed an abrupt change in the width of the spinal cord at the midthoracic (T 6) level, the kind seen in patients with arachnoid cysts of the spine, with evidence of a syrinx cavity below this area. His operation consisted of a laminectomy over this area of the spine and excision of the web of arachnoid that had formed the cyst. The operation was particularly difficult because of his scoliotic spine deformity and prior bony fusion.