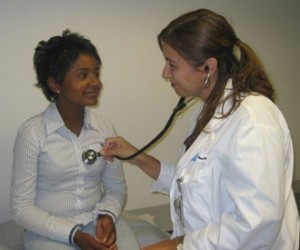 Jillian Morris-Jenkins wasn’t old enough to remember when her life was forever changed.

At only 2, she was diagnosed with stage IV neuroblastoma, the second most common solid tumor diagnosed in children. The cancer originated in her liver and ate three-fourths of the organ before spreading up through part of her rib cage and coiling itself around her aorta.

Morris-Jenkins’ aunt discovered the problem when she was changing the toddler’s diaper during a vacation to visit relatives in Illinois.

“She saw a lump on my chest, beating in rhythm with my heart,” said Morris-Jenkins, now 27 and a San Fernando Valley resident. “The doctors did not expect me to live.”

Morris-Jenkins and her mom, a single parent and Pasadena police officer, flew back to Los Angeles for treatment at UCLA, where she received full body radiation and high-dose chemotherapy. She underwent multiple blood transfusions and two major surgeries to remove the tumor. Doctors performed a risky bone marrow transplant using Morris-Jenkins’ own marrow in an effort to help her fight the disease. She spent the year between her second and third birthdays in and out of the hospital.

“I don’t remember most if it,” said Morris-Jenkins, who at a petite 4-foot-7 can easily pass for a pediatric patient. “I remember once, before one of my surgeries, being in the operating room, turning my head to the left and seeing my mom looking at me through a glass window. I thought it was a dream.”

Morris-Jenkins survived her cancer battle, but it left permanent scars.

Her short stature is due to the heavy doses of radiation doctors administered. She suffers from almost constant fatigue. She has low blood sugar and high blood pressure. She also has osteopenia, a condition that causes her bone density to be lower than normal and is considered a precursor to osteoporosis. She’s vulnerable to breast cysts and underwent her first mammogram at age 24. Because of all her therapies, she’s at higher risk for developing a recurrence of her primary cancer or developing a second, unrelated malignancy. And her doctors tell her it will be nearly impossible for her to have children.

“That was devastating to hear,” Morris-Jenkins said. “I always wanted to have a family. But I’m a miracle child and I'm a believer. I was diagnosed with stage IV cancer at age 2. I’m here. I’m alive. I’m 27. That means something to me, that there must be a purpose for why I’m here.”

Morris-Jenkins has been followed by Dr. Jacqueline Casillas in a pediatric survivorship clinic to help her deal with the late effects of her treatments. Morris-Jenkins recently transferred to a new clinic for adult survivors of childhood cancer, part of the UCLA-LIVESTRONG Survivorship Center of Excellence at UCLA’s Jonsson Comprehensive Cancer Center.

There, she is seen by a multidisciplinary team of physicians, nurse practitioners, social workers and other specialists who provide a personalized evaluation of her health and come up with strategies to address both her physical and emotional needs.

“Jillian is incredibly strong, focused on getting the care she needs and, as a result, I would say she is much empowered,” Casillas said. “She is very diligent about getting all her long-term follow-up care. She also focuses on keeping herself healthy by eating well, maintaining a healthy body weight and being physically active.”

Despite all her health challenges, Morris-Jenkins hasn’t let anything stop her.

She skipped two grades in elementary school – she says she was “a little nerd”—and at age 18, she earned an associate’s degree in liberal arts and sciences from Ventura College. Morris-Jenkins followed that up with a bachelor’s degree in cinema, television and the arts from California State University, Northridge. She now holds down a full-time job in advertising while earning a master’s degree in fashion merchandising and marketing at the Northridge campus.

“I want to run an online retail business,” says Morris-Jenkins, who in typical go-getter fashion already has the business license and a name for her web site.

She won’t say much more about her business venture other than her first focus will be shoes. She can’t let the competition know what she’s planning.

Even with her crazy busy schedule, Morris-Jenkins tries to maintain a rich social life. She loves to go dancing and has a passion for travel. She hopes one day to visit Japan.

Morris-Jenkins’ cancer has left her with some nagging health problems, yes, but it also has spared her one rite of passage many of her peers are experiencing now—finding themselves.

“The cancer is what defined who I am,” she said. “I’m a survivor. Not everybody survives cancer. I appreciate myself and my life so much more now.”

UCLA’s inaugural LGBTQ health fellowship: A look back at the first year

‘It taught me how to go about taking care of transgender and gender diverse patients,’ says first fellow Dr. M. Chase Cates, who trained in the Gender Health Program.

Congestive heart failure: what to expect

Dear Doctors: Our grandfather was diagnosed with congestive heart failure a few years ago. His strength and endurance have declined a lot, and now he’s [...]

Treatment has changed since his last broken rib

Dear Doctors: My husband slipped while out on his boat and cracked two ribs. He had a broken rib as a teenager (varsity football) and [...]