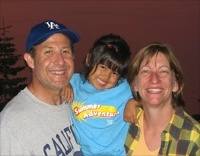 For Brad Zebrack, a diagnosis of cancer changed the course of his life.

The 25-year-old UCLA graduate who wanted to be a middle school teacher returned to school to earn master’s and doctoral degrees and now studies the impact of cancer on families and young adults.

Rendered sterile by the harsh chemotherapy he was given, Zebrack faced a life without children. He’s now the doting father of an adopted daughter.

Cancer, Zebrack said, is a part of him, even now, more than 20 years later.

Zebrack was diagnosed with Hodgkin’s lymphoma in 1985. Although he was living in San Francisco at the time, he returned to the Los Angeles area to live with his family during treatment.

His oncologist said he had a good chance to beat his cancer, but he’d have to put his life on hold for a year. He did and, after 12 months of intense treatment, he beat his cancer.

“So much happened that year and I thought, when this is over, I want to do something for another year that would be better than chemotherapy,” said Zebrack, now 46 and an assistant professor of social work at the University of Southern California.

During chemotherapy, to distract himself from the debilitating side effects, Zebrack began planning a one-year bicycling trip around the United States. The summer before his diagnosis, he’d bicycled from San Francisco to Boston and found the experience exhilarating. Planning another trip motivated him to push through the grueling treatments.

“It was important to have something I could really look forward to,” he said.

“No one was talking about cancer survivors then,” he said. “If people could see me on my bike and riding cross-country after having had cancer, it would let them know they can have a life after cancer too, that maybe there is hope.”

With his girlfriend Joanne, now his wife, Zebrack set off on his journey, which continues in other forms to this day. Together they rode 11,000 miles around the perimeter of the United States, stopping at cancer treatment centers and visiting cancer patients, as well as sleeping in parks and fire stations.

“Since then, cancer has always been a part of who I am,” he said. “It took a year to get back physically to a place where I felt strong again. Every cold or cough I got worried me. I was fatigued a lot of the time.”

Knowing his chemotherapy likely would cause sterility, he banked some sperm and forgot about it. After he and Joanne married in 1990, and while he was earning a master’s degree in social work and public health at the University of California, Berkeley, the couple decided to start a family. They visited a fertility specialist, but were unable to conceive.

Cancer, again, was rearing its ugly head in Zebrack’s life.

After a year of frustration and disappointments, the couple decided to drop their efforts. They moved to Michigan, where Zebrack earned a doctorate in social work and medical sociology at the University of Michigan. He worked as an oncology social worker, studying the impact of cancer on families and young adults.

In 1999, Zebrack returned to California and called Ganz, director of cancer prevention and control research at UCLA’s Jonsson Comprehensive Cancer Center. He landed a fellowship in her division and continued his research at UCLA until leaving in 2003 to take a faculty position at USC, where he continues to focus on cancer survivorship. He also continues to collaborate with Ganz.

“Cancer and its treatment have physical, emotional and social effects that last long after therapy is completed,” he said. “It’s great that medicine has gotten so good at treating cancer, but because of that success, there are a lot of people out there with other important issues to deal with.”

His work was satisfying, and he loves raising his daughter, Sierra, now five. His life is full, and happy.

“The whole second half of my life will be different than the first,” he said. “My daughter is everything. I still worry about my health, but no more so than anyone my age. The cancer is there in my head, but I put it in the back of my mind. I live for the future now.”