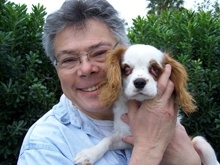 It was a watershed moment for Bob Ferber.

It was 2003 and the Calabasas man was halfway to Palm Springs for a family vacation when he realized he’d forgotten something at home.

He had neglected to pack the pills he’d taken every day for the previous 3 1/2 years, the revolutionary cancer treatment Gleevec that had beaten back the chronic myeloid leukemia (CML) that nearly took his life.

For a long time, Ferber’s battle with cancer had dominated his every thought. How could he have left home without the very thing that gave him back his life?

“It was the first time I ever forgot those pills,” said Ferber, a 55-year-old prosecutor with the Los Angeles City Attorney’s office and an engaging man whose enthusiasm and gratitude for life is contagious. “I couldn’t believe it.”

Maybe it’s because Ferber is feeling so good these days. He works long days prosecuting animal abuse cases for the city, volunteers in schools to educate students about animal rights and cares for his rag tag menagerie at home – a band of dogs and cats with a variety of disabilities, all rescued after they were neglected or abused.

“I’m healthier now than I was before I got the cancer,” Ferber said. “I don’t feel like a cancer survivor. That, to me, is someone just keeping their head above water. I feel more whole now than I ever did.”

Bob Ferber today is worlds away from the man diagnosed with CML in July 1999. His cancer was already in blast crisis – the most severe and lethal stage of CML. His prognosis was grim. At times, he was so ill he had to crawl to the bathroom. Worse, he couldn’t care for his beloved animals.

CML is a cancer of the bone marrow that results in rapid growth of the blood forming cells. Most common in middle-aged people like Ferber, CML is associated with a genetic abnormality called the Philadelphia chromosome.

In the chronic stage, CML patients experience skyrocketing white blood cells counts, but generally exhibit no symptoms for three to five years. When CML is in blast crisis, as Ferber’s was, it’s very difficult to treat. Bleeding and infection can occur as the bone marrow fails. In blast crisis, CML kills within months. The only potential cure in 1999 was a bone marrow transplant, and donors were difficult to find.

“The big C was something I was afraid of, like everyone else,” Ferber said. “I knew it could kill me.”

Before Gleevec, the treatment for CML was often worse than the disease itself. Ferber’s treatments were debilitating. He was first given the chemotherapy drug hydroxy-urea, and side effects left him bedridden for three months, and hospitalized once.

Doctors switched to interferon. Ferber was wracked with bone pain and was so weak he couldn’t walk to the bathroom on his own. Instead, he was forced to crawl on his hands and knees. His legs were swollen, his vision was dimming and open sores in his mouth made drinking even water an exercise in agony.

No bone marrow donor had been found in the months since his diagnosis, and a match seemed unlikely. Ferber felt his resolve draining away.

Then, in the fall of 1999, Ferber heard about a clinical trial at UCLA’s Jonsson Cancer Center testing what was then an experimental leukemia pill, the now approved Gleevec. The trial was for patients who had failed all other treatments. Although the interferon was technically still working for him, Ferber made an appointment at UCLA.

Although researchers told him Gleevec wouldn’t work well on patients with CML in blast crisis, Ferber was hopeful. Even if it didn’t help him, he thought, maybe the research would help someone else down the line.

“I believed the drug was going to work,” Ferber said. “It was my only hope.”

Then, in January of 2000, a bone marrow donor was found. With the transplant, Ferber would have a 60 percent shot at survival. But because his immune system would be compromised, Ferber would need to stay away from his animals for up to a year. It was an agonizing decision for the animal lover. Finally, the procedure was scheduled for February 2000. But before it could be performed, Ferber got the phone call he’d been praying for.

It was 4:45 p.m. on a Friday, and Ferber was stuck in rush hour traffic when his cell phone rang. It was UCLA. If Ferber wanted it, there was one spot left in the study, the last opening in the nation. He just had to get to UCLA before 5 p.m.

Sitting in his car, miles away from UCLA with nothing but bumper-to-bumper traffic ahead, Ferber began to cry. He’d never make it. Still, he inched forward and finally arrived in Westwood at 5:45 p.m.

Fortunately, the clinical trials team had waited, and Ferber was enrolled in the study that would vanquish his cancer and give him a new life.

Ferber began taking Gleevec in February 2000. Within a month, his white blood cell count, once as high as 300,000, returned to normal levels of about 10,000. Within several months, the Philadelphia chromosome responsible for his cancer began disappearing from his bone marrow.

Today, nearly eight years later, there are no signs of the Philadelphia chromosome in Ferber’s bone marrow. In effect, he no longer has CML.

In May of 2001, the U.S. Food and Drug Administration approved Gleevec for use on CML. About 90 percent of patients in the chronic stage of CML achieve full responses. Patients in blast crisis sometimes become resistant to the drug, but Ferber remains healthy.

It’s a good thing, too. His life is very full.

He loves his work and is determined to make the city’s animal protection unit a powerful entity that aggressively prosecutes abuse and neglect. Whenever he can, he speaks to local students about the importance of treating animals with respect, even those who are a little bit different.

When he visits campuses, Ferber takes members of his furry family with him. On a recent trip, a three-legged shepherd named Trapper charmed students by shaking hands with his stump.

“I take my handicapped animals into mainstream schools and we talk about being different,” Ferber said. “Those lessons translate into how they treat their fellow classmates.”

Ferber also is active in the Wellness Community, an organization that provides psychosocial support for cancer patients and their families. He recently spoke to a group of children who had lost a loved one to cancer, and again he brought his animals to help.

Trapper and A.J., a blind Lhasa Apso, were the special guests and “the dogs did their magic,” Ferber said.

“We talked about how animals grieve when they lose a friend, and about how they know when one of their friends is sick,” Ferber said. “The kids could relate to that.”

At home, Ferber’s house is as full as his life. He lives with an army of dogs and cats, all rescued – like Ferber himself – from the brink of death. Each has its own special needs. In addition to Trapper and A.J., Ferber’s menagerie also includes an epileptic cat named Riley, Cleocatra, a tabby with diabetes, a formerly comatose and a quadriplegic poodle named Frankenweiner who has since recovered from a coyote attack.

Life is good. Ferber is happy. He feels he’s been given a great gift.

“I know this pill could stop working at any time,” he said. “But if I die tomorrow, I will have lived a much better life than if I had stayed around for another 30 years and never gotten sick. This experience with cancer has opened up a new life for me, a life filled with one miracle after another. I want to pay back those miracles now, if I can.”