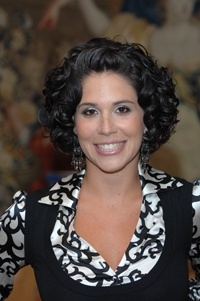 In 2005, Dalia Margolis was a senior studying psychology at UCLA. She was 21 and her whole life seemed spread out before her, full of endless possibilities.

As she was getting ready to go out with friends on Halloween, she noticed that one of her boots seemed tighter than the other. She figured it was nothing to worry about. Her mother, as mothers often do, knew better.

“I went to my parents’ house in San Diego on Thanksgiving weekend and my mom saw me in skirt.

She said your leg looks swollen and told me to get it checked at UCLA,” said Margolis, now 23. “She had a motherly sixth sense that something was wrong.”

Margolis made an appointment to see her doctor. An ultrasound was ordered of the swollen area, the back of her left knee. There were, the doctor told her, two possibilities – a blood clot or a tumor.

A reeling Margolis was referred to a surgical oncologist, who ordered an MRI and a biopsy. After viewing the scan, the surgeon told Margolis he was 85 percent sure she had synovial sarcoma, a rare type of soft tissue cancer that occurs mostly in young adults.

“My first thought was how could a 22-year-old healthy girl, with no family history of chronic illness, be diagnosed with such a horrific disease?” Margolis said. “I thought it was all a bad dream. Then I realized that if fate had given me a tumor in my leg, I was going to make sure that I played an active role in my destiny and strive to become a cancer survivor.”

The biopsy confirmed the surgeon’s suspicion. Margolis had cancer. Her life of endless possibilities narrowed. Her immediate future would be radiation and chemotherapy that would rob her of her long, straight dark hair. Doctors wanted to shrink the tumor before cutting it out in an attempt to save Margolis’ lower leg. Then she would undergo surgery, followed by more chemotherapy.

She underwent her first round of chemotherapy in December 2005, a grueling regimen that pumped the cancer-killing poison into her system 24 hours a day for seven days. She had to be hospitalized during the treatment, then got to go home for two to three weeks before returning for more. In all, she underwent three rounds of chemotherapy before her surgery on May 5, 2005. As predicted, her hair fell out in clumps.

“At first I got emotional about it, but then I shaved it all off,” she said.

After reviewing new scans, Margolis’ surgeon said it appeared a vein and a major artery were passing through the tumor. If that was the case, he would have to amputate her leg at the knee. But he wouldn’t know until he cut her open.

“I was so incredibly scared, because the second I woke up, I would know if they had to amputate,” Margolis recalls. “Fortunately, thanks to God and everyone around me, everything was fine. They took the tumor out and the margins were clear. I still have my leg.”

More chemotherapy followed and Margolis wrapped up treatment in July 2006.

When she was diagnosed, Margolis withdrew from UCLA to focus on getting well. She returned and graduated in June 2007 with a degree in psychology. She plans to attend graduate school, and she’s weighing her options as she works and volunteers in San Diego, back at home with her folks.

One thing is certain, her battle with cancer changed her forever.

“I value every second of my life now,” said Margolis, the oldest of three siblings. “I don’t take anything for granted. I don’t make a fuss over little things, which I used to do. In a way, I’m grateful I got cancer. It made me open my eyes to a world I’d never been introduced to before. I’m going to be involved with cancer survivors now, and meet a lot of new people I’d never meet. I want to help them through their cancer experience. I’m so grateful for that gift.”

Margolis, whose straight hair has grown back as a mass of soft curls, also is grateful for the tremendous support she received from her family and friends while she fought cancer. When she was hospitalized, her room was always packed with well-wishers offering love and support. They decorated her room. They watched movies. She never once felt alone.

“Most of the strength I developed to help me recover was due to them. I had a huge support group who made my nine months of treatment almost a piece of cake,” Margolis said. “Without all of them, this would have been a much more depressing story. These people showed me the true value of friendship and the magic behind positive energy. I don’t think I would have made it through this without them.”